I've been collecting photos of the ISS. This one is currently my desktop wallpaper: 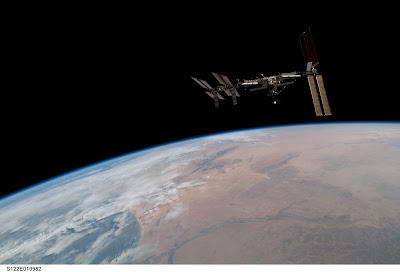 I believe it's taken from the shuttle, from a few missions back.

It's also possible to photograph the ISS from the earth, but it can be hard to do, because you need a telescope, and it's moving quite fast when it passes overhead, and is typically only visible for two or three minutes. Here is the result of one attempt that succeeded: 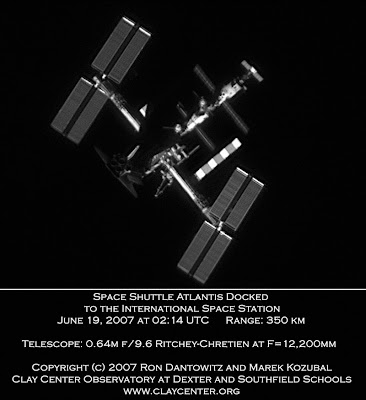 But you don't need a telescope just to see it pass overhead, it is visible to the naked eye, as a point of light moving across the sky. With good binoculars, you might even make out some of it's features. There is a place on the web where you can enter your location or zip code, and find out when and where it will be visable from your location: 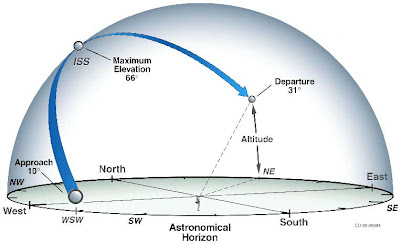 Find out when the ISS passes over your city

Have you ever wondered what's been going on at the ISS? What's coming up next? Now you can find out, by checking this link for the latest news:

I've been reading it lately. There are all sorts of things going on all the time. Currently there is an overlap of station crews, which change about every six months. The former crew is due to return to earth April 19th. And South Korea's female astronaut So-yeon Yi is making her first flight and visit to the station. She is due to return on the 19th with the former crew, via a Soyuz spacecraft.

You can find out all the things that don't always make it into your local or national daily news, and keep in touch with the bigger picture. There is also lots of interesting links in the sidebars to explore. Great fun!