Does the internet indicate our next President? 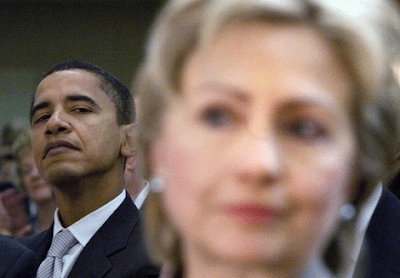 Some people think the internet traffic and buzz say so. And they think it says it's going to be Obama. From Nathan Tabor at The Conservative Voice:

Obama Beating Clinton and McCain on the Internet

[...] if the internet is any type of serious gauge for political success, then Sen. Barack Obama will be the next president of the US. And John McCain is destined to finish out-of-the-money.

For example, according to alexa.com, an organization that monitors the traffic flow for web sites throughout the Internet, JohnMcCain.com is ranked 24,291, HillaryClinton.com is ranked 9,848, and BarackObama.com is ranked 2528. That's right. Out of the millions of web sites on the worldwide web, Obama's virtual "campaign headquarters" ranks 2,528.

When it comes to blogger links on political websites, technorati.com, another organization that monitors Internet traffic patterns, shows that McCain's campaign web site has 12,863 blogger links, while Hillary's has 31,100 blogger links. But once again, Obama's numbers dwarf Clinton's and McCain's, with 37,295 blogger links.

Several observations can be made from these numbers: Obama is beating Clinton on the internet; while both Obama and Clinton are crushing Republican John McCain on the worldwide web.

According to political strategists who monitor the Internet, when you match these "virtual world" numbers up to fundraising figures in the real world, one sees a similar pattern: Obama first, Clinton second, and McCain third.

There's plenty of blame to go around for conservatives who have allowed this situation to occur. While conservative bloggers and Internet news websites present ideas and solutions to problems, those on the left denigrate, smear and ridicule those with whom they disagree. Yet, most Democrat officeholders on the national level know that these radicals on the net are an important part of acquiring more power. There is a "synthesis" of convenience between far-left bloggers and politicians.

Meanwhile, between conservative politicians and the conservative bloggers and commentators there is a major problem. The problem, for the most part, is there's no relationship to speak of. There's no building of relationships, no cooperation, and no coordination. [...]

The article goes on to give some examples of things conservatives could have done or can still do. But is there enough time? The lack of enthusiasm for John McCain by self-described conservative Republicans certainly isn't helping GOP fundraising. 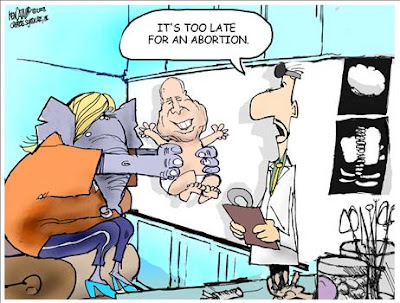 It makes me think of that 60's song, with the lyrics "You can't always get what you want... but you just might get what you need". But of course if you don't take what's being offered, you get NOTHING. Or worse, what you dread.

But back to the article's premise: Is internet activity a true indicator of how the American electorate as a whole is going to vote? It might be, but I'm not so sure. I do have a theory.

Yet todays reality is, not everyone is online, and even among those who are, many of them aren't online a lot, and when they are, they aren't reading about politics. Many of them DON'T read blogs. I'm often shocked about things I learn about on blogs that are not even discussed in the MSM. Most of the people I know off-line never hear about anything that's not mentioned in the MSM.

My theory: I think it's possible that there are a lot of baby boomer Democrats and Republicans, middle class, middle aged, middle of the road, Chamber of Commerce types, that are going to vote for John McCain. They aren't spending a lot of time on-line following Obama or anyone else. But they already know what they want, they pay attention, and they vote consistently.

Time will tell if I am right, or if the internet traffic stats are. But even so, I think the internet IS telling us something. It's telling us that the younger citizens of our nation have no problem at all voting for a President who attends a "God Damn America" church that preaches against "Middle Classness". A man who refuses to wear an American flag pin or place his hand over his heart when our national anthem is sung. Whose wife has been ashamed of our country most of her adult life, and who says America is downright mean.

I find it sad. The Anti-Americanism, the hatred of our country by the Left seems to have been taught and communicated to our youth to the point where it's becoming mainstream opinion. Even if such a man isn't made president in 2008, how long will it before he or someone like him eventually is?

I don't think this bodes well for our Republic. Not for those who think it's worth cherishing and preserving. But I'm not sure how much of this is the Media trying to shape opinions, and how much of it represents real voter intention. I only know for sure that we will eventually see when the voters vote, which way the wind is actually blowing.

Here's another link to a Gallup poll. I'm not sure I want to keep linking to Gallup polls, because I'm not sure how much of it is real reporting, and how much they are trying to influence opinion. But for whatever it's worth, here it is:

You can read the rest for more graphs and details, but this clearly shows that the next generation sees nothing about Obama to give them cause for concern. God Damn America? I'm not religious, but if that's our future, God help us.

This was on Pat's blog this morning, and it's a topic I've been thinking about while writing this post. Why? Because prior to the 17th amendment, our system of choosing and retaining Senators was part of a system of checks and balances. The Senate was originally created as legislative buffer, a counter-balance to the House of Representatives. Since the 17th amendment, the brakes have been off, and our system of government has been deteriorating. I recommend following the link and reading the whole post, it's not very long, but it is very important. Our government, as it was created, could withstand just about anything. But as soon as the built in protections are removed, it can only falter and fail. We need to fix it before it's too late.

I don't think the Internet is representative. Remember, Fred Thompson was the leading Republican candidate on the Internet -- after Ron Paul, that is...

That's true. I suppose we shall see after the election, how meaningful the internet buzz was in relation to what actually happens.