From Hamas TV: "Brothers of Apes and Pigs" 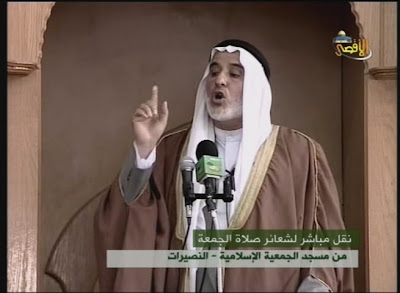 Hamas MP and Cleric Yunis Al-Astal in a Friday Sermon:

"We Will Conquer Rome, and from There Continue to Conquer the Two Americas and Eastern Europe"

Following are excerpts from an address by Hamas MP and cleric Yunis Al-Astal, which aired on Al-Aqsa TV on April 11, 2008.

Yunis Al-Astal: Allah has chosen you for Himself and for His religion, so that you will serve as the engine pulling this nation to the phase of succession, security, and consolidation of power, and even to conquests thorough da'wa and military conquests of the capitals of the entire world. Very soon, Allah willing, Rome will be conquered, just like Constantinople was, as was prophesized by our Prophet Muhammad. Today, Rome is the capital of the Catholics, or the Crusader capital, which has declared its hostility to Islam, and has planted the brothers of apes and pigs in Palestine in order to prevent the reawakening of Islam – this capital of theirs will be an advanced post for the Islamic conquests, which will spread through Europe in its entirety, and then will turn to the two Americas, and even Eastern Europe.

I believe that our children or our grandchildren will inherit our Jihad and our sacrifices, and Allah willing, the commanders of the conquest will come from among them. Today, we instill these good tidings in their souls, and by means of the mosques and the Koran books, and the history of our Prophets, his companions, and the great leaders, we prepare them for the mission of saving humanity from the hellfire on the brink of which they stand.

Yeah, we really do need to keep sending money to these folks. After all, they NEED us Apes and Pigs to keep sending them money to help them to destroy us. And lets send Jimmy Carter to talk to them too, Carter helped Iran to strengthen Hezbollah into what it is today, I'm sure he can help Hamas thrive and prosper too. After all, Carter is on their side. Just one of the many reasons Islamic fascists everywhere love our Democrat party.