What About Questioning A Kennedy?

Oops I forgot, that's not allowed. Why IS that?

I grew up in Connecticut. When I went to college in Boston, I noticed that the locals talked about all the Kennedy's like they were Gods. I made the mistake of asking some of my dorm mates, who were Massachusetts natives, "What is so special about the Kennedy's? Especially Ted Kennedy?

Apparently, I just needed it shouted into my brain repeatedly, untill I finally understood. I DID come to understand, that it was not a good question to ask Massachusetts natives, unless I wore earplugs first. Someone told me there was a local museum with John Kennedy's toothbrush in it that I really must go and see... I stopped asking Kennedy questions, and moved to California instead.

Since then, I've seen Ted Kennedy ask a lot of people questions, and question a lot of things.

Many people feel Ted ought to be asked questions rather than be asking them. Like about Mary Jo Kopechne, who drowned in his car... oops, not drowned, SUFFOCATED, in a small amount of air, because nobody came to rescue her in time because they didn't know she was there because Ted didn't tell anyone until it was too late...

Now, Ted is comming out with a new Children's book, featuring his Portuguese Water Dog, "Splash". It will be called "My Senator and Me: A Dogs-Eye View of Washington, D.C."

Some people have said they think choosing a Water dog named "Splash" was kinda rude and thoughtless, considering... you KNOW. 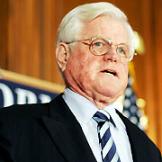 But really, why should it be? You need to remember, Ted gets to ASK the questions, not have to ANSWER them. That being the case, he really doesn't have to worry about being insensitive about... you KNOW.

Tammy Bruce made an interesting comment about Ted Kennedy during her talk on C-Span2. She said something like, "Nobody should be suprised that Ted Kennedy wants to the US to pull out of Iraq, because he has a history of abandoning people in need."

You can see photos of where it happened HERE:

Excerpt: Remember these images the next time that alcoholic, murdering, pompous asshole, Ted Kennedy talks about being morally outraged about anything.

You can read more about the accident and cover-up HERE.

Here is an informative post about Kennedy from The Chatterbox Chronicles, with embedded source links.
Posted by Chas at 11:41 PM

Ha,ha. That was hilarious! That incident pretty much sums up the intellectual (sarcasm, of course) left.

I had never heard of Chappaquiddick until I read about it on a conservative blog a few days ago but then I was too young to remember the incident.

I have never understood the fascinations with the Kennedys and am always mortified when I get lumped into the same catagory as Ted because my independent views are often left of conservatives. I have to wonder about the people that keep voting him back into office year after year. Thanks for the heads up and if I ever make it out to Mass., I won't bring the subject up.

I do remember the incident, very well, but what the hell, I'm old...

Kennedy got away with murder, at the very least, negligent homicide... All because of his family name and $$$...

He had to wait for the *drunk* to wear off while that girl drowned and was left for several hours in her watery grave...

The gal who was shouting at me, her dad was an Irish cop. It seems that the Boston Irish are raised to believe that the Kennedys' are the saviours of Irish American Catholics, and are above all reproach. To talk about them objectively seemed unthinkable, to critisize them... blasphemy.

To the locals, I was a suburban Connecticut Protestant outsider, who just didn't understand a truth they believed must never be questioned...

And I would guess that is how Teddy keeps getting re-elected. No questions... no problems!

Great post. Thanks again for the link. Your story helps explain how he keeps getting re-elected. And it is scary!

Anybody who reads his children's book needs their head examined.

Massachusetts is a world unto itself, which I never completely understood. They can be very conservative, prudish even, but also wildly liberal.

They have Kennedy and Kerry as senators, yet they elected a Republican Governor.

When I lived there over 20 years ago, they hated gays, yet they elected Barney Frank. Repeatedly.

Now they have gay marriage. I suspect that is because they frown on promiscuity, and marriage for gays appeals to them as a conservative alternative to gay promiscuity.

Boston has over 300 colleges and universities too, with lots of eggheads, commies and social engineers. Mix them up with the Boston working class, and you get some weird results.

Yeah Chas, I am old enough to remember....also the scandal in Palm Beach with Smith with Teddy there drunk when the rape occurred.

Yesterday or the day before exposed about his college club...wow and he sit there and said what he did to Judge Alito.

Heard about the book, as I said to Under the News...I would think they would have a LAW against this. (LOL) terrorizing children for one.

P.S. Chas, thanks for the heads up last week on Tammy Bruce being on CSPAN2....I watched the whole thing. Appreciated it!! (smiling)

Yes, there was the Smith case and also the Martha Moxley murder case in Connnecticut, involving yet another Kennedy cousin.

I'm glad you got to see Tammy speak, she's great. She is a genuine feminist, not a politically correct one, who will speak up for abused women, no matter who their abusers are.

That is how she got in trouble with the N.O.W. leadership; they insisted on covering for Clinton because he was a Democrat, and for O.J. Simpson because the N.A.A.C.P. wanted them to keep quiet.

She was often told that individual women had to be sacrified for the advancement of feminist causes; covering up for men like Clinton, Kennedy and O.J. was more important than the women they harmed.

One of my favorite Tammy quotes about Clinton is:

"He had Monica Lewinsky on her knees, when he should have been cutting off Osama Bin Laden at his."

P.S. Thanks for that additional information. Patrick has been after me to get her new book....gotta order it!! (smiling)

I linked to this post...hope that was okay in my Sat's posting on Kennedy and The Owl Club. (smiling)