German Anti-Americanism; what you believe is more important than what you know? 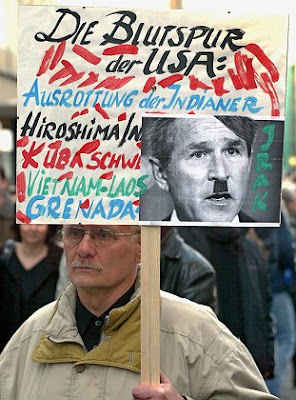 Bush-bashing; a national sport in Germany?

The Anti-American sentiments of socialist Western Europe are well known. A recent survey in Germany says 48 percent of Germans think the United States is more dangerous than Iran, with only 31 percent believing the opposite.

The following are excerpts from a German magazine article, that examines the way Germans see both the USA and Iran (I enjoyed it, as some of the commentary is rather scathing):

[...] There are some Germans who will never forgive the Americans for VE Day, when they defeated Hitler. After all, Nazism was just an accident, whereas Americans are inherently evil. Just look at President Bush, the man who, as some of SPIEGEL ONLINE's readers steadfastly believe, "is worse than Hitler." Now that gives us a chance to kill two birds with one stone. If Bush is the new Hitler, then we Germans have finally unloaded the Führer on to someone else. In fact, we won't even have to posthumously revoke his German citizenship, as politicians in Lower Saxony recently proposed. No one can hold a candle to our talent for symbolism!

Anti-Americanism is the wonder drug of German politics. If no one believes what you're saying, take a swing at the Yanks and you'll be shooting your way back up to the top of the opinion polls in no time. And on the practical side, you can be the head of the Social Democratic Party and endear yourself to the party's hardcore with a load of anti-American nonsense, and still get invited back to Washington -- just look at Gerhard Schröder. In fact, you could, like leading German politicians in the debate over the planned American missile shield in Europe, be accused of having "an almost unbelievable lack of knowledge" by a former NATO general, and even that wouldn't matter. It's all about what you believe, not what you know.

Anti-Americanism is hypocrisy at its finest. You can spend your evening catching the latest episode of "24" and then complain about Guantanamo the next morning. You can claim that the Americans have themselves to blame for terrorism, while at the same time calling for tougher restrictions on Muslim immigration to Germany. You can call the American president a mass murderer and book a flight to New York the next day. You can lament the average American's supposed lack of culture and savvy and meanwhile send off for the documents for the Green Card lottery.

Not a day passes in Germany when someone isn't making the wildest claims, hurling the vilest insults or spreading the most outlandish conspiracy theories about the United States. But there's no risk involved and it all serves mainly to boost the German feeling of self-righteousness. [...]

(bold emphasis mine) But what about Iran? How do Germans feel about Iran? Apparently it's not so safe to be Anti-Iranian. 20 years ago, a Dutch entertainer produced a short TV sketch portraying Ayatollah Khomeini dressed in women's underwear, and... well, I can't reprint the whole thing here, but DO read the whole article. Treat yourself! I didn't even excerpt all the scathing bits here! :-)

From George Handlery at the Brussels Journal:
Replace the USA?

The "thing" that bothers me about all of this is the way everyone thinks that this America bashing is something new. It has always been there and I saw too much of it while we were stationed in Germany.

YET - As elsewhere - the "love-hate" circle is ever present - full of people who DO actually care about us and understand - right in the middle of all of the protests, etc.

You're right Chrys, it's not new at all. I think it's easy for people who haven't had to make much effort for their own protection for so long, to imagine that there is no danger to protect against.

And as you rightly point out, it's not all hate, it's a mixed bag. And as the article points out, it's SAFE to bash America; there are no personal consequences, and in a socialist state, there are even many benefits.