Is the troop surge in Iraq REALLY working? 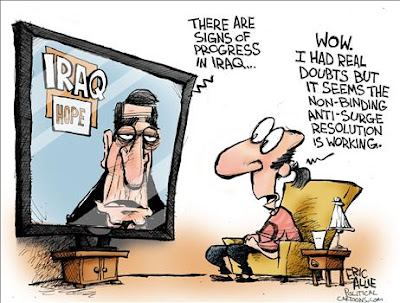 If you listen only the the MSM, you would think not. The recent suicide bombing in the green zone, killing three Iraqi Members of parliament, and severely wounding a fourth, is very disheartening news. Yet if you want to understand what's really happening, you have to look at the whole, larger picture. One set back is not the whole story. Charles Krauthammer reminds us there is more:

By the day, the debate at home about Iraq becomes increasingly disconnected from the realities of the actual war on the ground. The Democrats in Congress are so consumed with negotiating among their factions the most clever linguistic device to legislatively ensure the failure of the administration's current military strategy -- while not appearing to do so -- that they speak almost not at all about the first visible results of that strategy.

And preliminary results are visible. The landscape is shifting in the two fronts of the current troop surge: Anbar province and Baghdad. [...]

Krauthammmer then goes into some detail about the real changes in those areas, with new cooperation from the Sunnis, who were previously resistant. Stability is increasing, and the surge hasn't even entered full swing yet:

[...] How at this point -- with only about half of the additional surge troops yet deployed -- can Democrats be trying to force the U.S. to give up? The Democrats say they are carrying out their electoral mandate from the November election. But winning a single-vote Senate majority as a result of razor-thin victories in Montana and Virginia is hardly a landslide.

Second, if the electorate was sending an unconflicted message about withdrawal, how did the most uncompromising supporter of the war, Sen. Joe Lieberman, win handily in one of the most liberal states in the country?

And third, where was the mandate for withdrawal? Almost no Democratic candidates campaigned on that. They campaigned for changing the course the administration was on last November.

Which the president has done. He changed the civilian leadership at the Department of Defense, replaced the head of Central Command and, most critically, replaced the Iraq commander with Petraeus -- unanimously approved by the Democratic Senate -- to implement a new counterinsurgency strategy. [...]

(bold emphasis mine) The Democrats are always saying Give Peace a Chance. But the mere absence of war is not peace. Sometimes the only way way to achieve a real and lasting peace is through the exercise of strength against tyranny. How about giving General Petraeus a chance to do just that, like the Democrats agreed to? 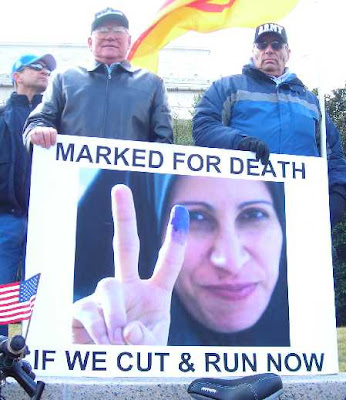 How about giving this woman, and many just like her, a chance? A chance to live in peace and prosperity, instead of abandoning them to a certain bloodbath?

Give Surge a Chance: Our moral obligation
This is the text Senator John McCain's speech at the Virginia Military Institute, as prepared for delivery. An excerpt:

[...] I know the pain war causes. I understand the frustration caused by our mistakes in this war. I sympathize with the fatigue of the American people. And I regret sincerely the additional sacrifices imposed on the brave Americans who defend us. But I also know the toll a lost war takes on an army and a country. We, who are willing to support this new strategy, and give General Petraeus the time and support he needs, have chosen a hard road. But it is the right road. It is necessary and just. Democrats, who deny our soldiers the means to prevent an American defeat, have chosen another road. It may appear to be the easier course of action, but it is a much more reckless one, and it does them no credit even if it gives them an advantage in the next election. This is an historic choice, with ramifications for Americans not even born yet. Let’s put aside for a moment the small politics of the day. The judgment of history should be the approval we seek, not the temporary favor of the latest public opinion poll. [...]

(bold emphasis mine) McCain doesn't downplay the pain of this war, yet he also understands the long term consequences of losing it.

Hat tip to Born again Redneck Yogi for the link.