Iran, under the surface... is it crumbling? 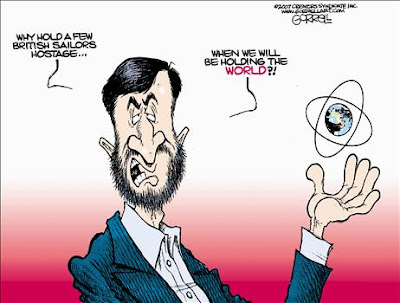 I've been reading a lot in the past few months about the internal and external pressures Iran is facing. Could it be that all the aggression and bravado that we are seeing is actually a sign of weakness? Iran has been evolving ever since it's 1979 revolution, and created plenty of problems for itself along the way.

They've run their economy into the ground, they have high unemployment, over half the population are under the age of 25, with few job prospects. There are rampant illegal drug use problems. The government isn't in complete control of everything, nor are they in complete agreement among themselves. And now they have their President Ahmadinejad, acting like a mad chimp. What's it all about?

A recent post by James Lewis at the American Thinker blog has a look at Ahmadinejad's behavior, and posits that it might be more about insecurity than strength. Some excerpts:

Display of Aggressiveness (Who is Mahmoud's Target?)

[...] Mahmoud Ahmadi-nejad, has been hopping around like a male chimp performing a threat display --- pant-hooting, baring his big canine teeth, and tearing off branches to impress the hell out of all the other apes. He's obviously trying to get a rise out of us.

So who is Ahmadi-nejad trying to impress?

It's a puzzle. The serious players in the world probably have a reasonable idea of real Iranian nuclear technology. They are not going to be affected by all the pant-hooting hullaballoo. His internal enemies are not going to be affected either, except maybe getting scared of being evaporated in a nuclear Armageddon ad majorem dei gloriam --- for the greater glory of Allah. That's not their style. They want nukes, but they think it's idiotic to make a big public fuss about it.

So what's the answer? My guess is that, like the pant-hooting chimp, Ahmadi-nejad is trying to control his own anxiety. Here's a man who preaches over and over again that he wants to conquer the world for Allah --- if necessary, by martyring himself and the people of Iran in a nuclear exchange with Israel and America. But his whole life experience is of cultural inferiority. The mullahs are reactionary throw-backs living in the 21st century, and live with an incredible of cognitive dissonance. They know their actual level of incapability. How do you cope? Well, you can only try to bluff and steal their toys.

Nuclear weapons are supposed to be the great equalizer, of course, which will make up for all those feelings of inferiority. But nukes are much more likely to end up as the great vaporizer of the regime itself. Ahmadi-nejad is a little man trying to act like a big man, and using displays of fearful power to succeed --- as he always has, in his tiny, closed world of ayatollahs and their fantasies. According to the MK (Marxist) rebels against Tehran, Ahmadi-nejad started as a prison interrogator and executioner for Khomeini. He has dealt with helpless opponents all his life.

Inspiring terror has always worked for him.

Ahmadi-nejad is quite ignorant about the larger world. On his recent visit to Saudi Arabia he was unable to talk directly with the King because he does not even speak Arabic --- the sacred language of the Koran. Apparently he left Saudi Arabia in a huff because the King told him what kind of danger he was creating for his own people. The Saudis must view him as a dangerous ignoramus. By comparison, many of the surrounding rulers, like King Abdullah of Jordan, are worldly and sophisticated. Even Bashar Assad went to school in France and Britain.

One hypothesis is that Ahmadi-nejad is engaging in a grand provokatsya, trying to trigger an emotional reaction from the West --- either retreat, or an unsustainable attack. Now that's not going to work with Bush and Cheney, who are pretty good poker players. It's not going to work with Tony Blair, in spite of the depressing recent performance of the Royal Navy. It's not going to work with Israel, which will fight all out, but only when it absolutely must. Oddly enough, these chimp displays only work to scare the Western public, especially on the Left, which may be slowly emerging out of its state of denial by seeing Ahmadi-nejad doing his nuclear song and dance.

Strategically, any action against this hair-raising regime must occur at a time and place of our choosing.

If and when we go for regime change in Tehran, it must be fast, clean, and evoked by clear and present danger.

Well, Ahmadi-nejad is helping to set the stage. Already 52 percent of Europeans, not famous for thinking clearly about rogue regimes, believe that violence may be justified to overthrow the Khomeinist regime. That's a couple of years after most of them threw screaming fits about the overthrow of Saddam. Ahmadi-nejad's chimp display seems to be having the opposite effect he intended. [...]

(bold emphasis mine) I think this chimp theory does explain a lot. And it's not hard to see how Ahmadinejad's terror techniques as interrogator would not play well on the world stage, and could even backfire.

I remember the Soviet Union being quite full of bravado, right up until it's collapse. Could we be witnessing something similar with Iran? Many people also believe that Iran exaggerates it's technological prowess and progress, but that is debatable. Because they are so secretive, it's difficult to know exactly how far they have advanced. Yet even the Soviet Union, which already had nuclear bombs and technology, crumbled none the less. Weapons and technology couldn't save them from their self-created internal problems.

Iran is still a very real potential danger, but will it continue in it's current form long enough to bring Ahmadinejad's plans to fruition? James Lewis looks in detail at the dynamics at work in and around Iran, and the pressures bearing on them. The West may indeed have good reasons for not using military force just yet. I recommend reading the whole article.

What can we do with a country like Iran? LOTS.
We have many, many non-military options for dealing with Iran.

Amadinejad supports Pop Islam, Iranian nationalism, to serve the goal of Martydom
In the 1979 Iranian revolution, the Ayatollah Khomeini crushed Iranian nationalism in order to bring about a completely Muslim State. But now Iranian President Ahmadinejad is trying to revive Iranian Nationalism, to advance his nuclear program and to rally the Iranian people for war and Martyrdom. Will it work?

Iraq in the Balance
Iran and Iraq have the largest populations of Shia Muslims. Shia Islam is a strong dynamic at work in both countries, and however we deal with one country will affect the other. Shia domination of Iraq is inevitable. What will that mean for Iraq, Iran, the Middle East, and the rest of the world?