When ayatollah Khomeini brought his Islamic Revolution to Iran in 1979, it was very austere, like the man himself. Traditional nationalism was suppressed; Khomeini wanted Iranians to be Muslims first, Iranians 2nd. In an effort to create a state where Islam permeated every aspect of life, a sort of Islamic pop culture evolved. 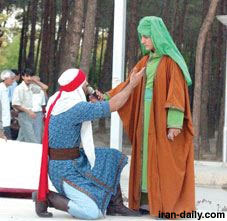 Iranian.com has an interesting article by Anna Mahjar Barducci, called "Pop Islam", which looks at how Iran's Islamist and pop cultures seem to mingle and loose themselves into each other, and how Iran's president Amadinejad is trying to tap into that pop culture to increase his popularity and further his goals - nuclear and other ambitions which he cannot push through without appealing to a strong national identity.

Here are some excerpts (with spelling corrections; I suspect English is not her first language):

[...] The revolution overwhelmed the Iranian reality, without being able anymore to cleave the profane from the holy. In this way, the appearance of the Iranian republic has been changed to transform everything into a product of the ayatollahs' regimes. However, this evolutionary process gave birth to a new pop-Islamic revolution, which influences religious ceremonies too.

In the markets of Tehran, old men sell CDs of shi’a religious rituals. In one of them, young people start shouting the name of the prophet ’Ali, increasing the rhythm until the sounds become similar to pop-disco music. All in a sudden, as if they were in a rave party, they get undressed, while continuing to repeat the name of ’Ali. In this revolution, the Islamist and pop culture seems therefore to mingle, by loosing themselves into each other.

The Iranian president, Mahmoud Amhadinejad, finds himself at ease in this new modern revolution.

In one of his latest events, he brought men dressed up with coloured local robes, enphasizing the national element. Many Iranians asked themselves what was going on. Khomeini tried to destroy the national identity, by imposing the religious-Islamic one. He wanted his population to feel first Muslim and then Iranians. 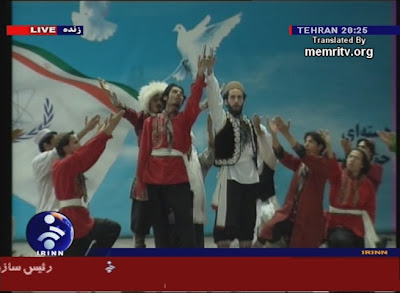 Ahmadinejad changed again the rules. He brought up the national and the religious identity at the same level, adding a new element to the Iranian revolution. Ahmadinejad – provocatively called by the opposition in the country Ahmaqi-nejad, the race of the stupids – understood that to have his own population backing the nuclear project, a pop-Islamic revolution was not enough. He needed a pop-and most of all national-Islamic revolution.

Actually, the stregthening of the Iranian army and the acceleration of the nuclear plan can only be possible if the feeling of belonging to the Iranian nation is restored. [...]

The article goes on to explain how this restoration of national identity is being used to further Amadinejad's goals by preparing his countrymen for martyrdom in a war with unbeleivers. It also explains why Iran's nuclear program is a key element in paving the way for the return of the Mahdi, as believed by the Hojjatiyeh, a religious sect despised and banned in 1983 by Khomeini for being too radical.n Members of that sect include Amadinejad and his spiritual and ideological mentor, the Ayatollah Mohammed Taqi Mesbah-Yazdi, a powerful political and religious figure, who a few months ago praised martyrdom operations.

The Hojjatiyeh sect believes the Mahdi will return only after massive chaos, war and bloodshed. Many observers believe that Iran is cultivating it's nuclear option to that end; to bring about the return of the Mahdi sooner. 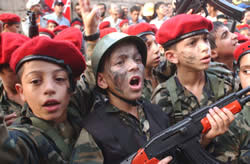 Martyrdom is a popular theme in Iran these days, making the regime more radical than it's predecessors. It's taught in schools, preached on TV, and even extended to youth throughout the Middle East via Hezbollah's Mahdi Scouts, which trains youths by the thousands for combat and martyrdom.

People who doubt Amadinejads Martyrdom plans for the Iranian people have not been paying attention. I have to give the man credit, he doesn't hide it. A speech he made recently made it quite clear:

Ahmadinejad: Glory, Honor Await the Continuation of the Path of Martyrdom (Shehada); God Has Appointed the Hidden Imam to Support Us

In a speech on Saturday, March 31, 2007, Iranian President Mahmoud Ahmadinejad praised martyrdom (shehada) and said that nothing but victory awaited the followers of this path:

"Any nation that can educate hundreds of thousands of people to be willing to martyr themselves [shehada] and to attain the height of martyrdom is invincible... Anyone who is willing to [set] martyrdom in the path of [his] ideals is always the victor. Being on the path is victory [in itself], and defeat on this path does not exist... The willingness to carry out shehada is an invincible weapon, that nothing can overcome.

"You saw last summer how the Zionist regime, armed to the teeth, was defeated in the face of the young faithful of Hizbullah... God has not left us defenseless in the face of the front of arrogance [i.e. the West, led by the U.S.]. Our revolution and our state have an owner; God has set the Hidden Imam to support us... Martyrdom [shehada] is the shortest path to attain the height of human perfection. Those who have carried out martyrdom [i.e. the fallen shahids] are today looking at our behavior and illuminating the path of our nation like a floodlight..."

(bold emphasis mine) This does not bode well for us. Especially since Nancy Pelosi, Harry Reid, many Democrats and even some Republicans, aren't paying attention to the obvious.