America is worse than Sharia law? 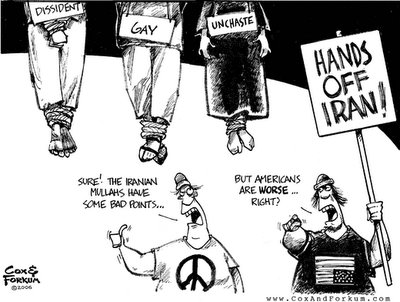 From Cox & Forkum, you can click on the link to see the related commentary. One of the links there is to an article from January 2005 at FrontPageMag.com:

In the article is a picture I printed recently, of a woman being buried in the ground prior to being stoned to death: 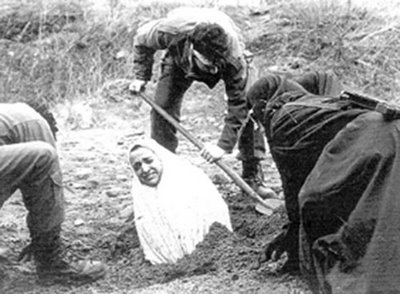 The photo, which is from Iran, was taken in 1992 in the town of Arak. Here is an excerpt from the article:

Women sentenced to death by stoning are buried in the ground up to their necks. Iranian law regulates the size of the stones used by the executioner crowd; stones cannot be big enough to kill the sentenced woman too quickly, as the purpose of this barbaric ritual is to inflict as much pain as possible before death. On the other hand, stones cannot be too small, as each blow must be dramatically painful. 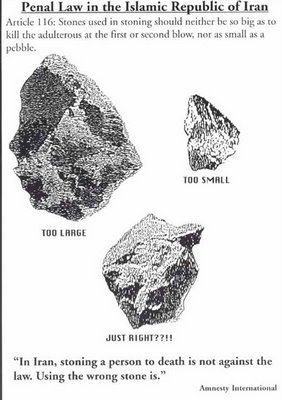 Such rules and regulations are quite ephemeral in the Islamic Republic. In a particularly gruesome execution carried out in 1993 in the city of Arak, a woman was to be stoned to death in front of her husband and two young children. After the stoning began, the woman was able to free herself from the hole in the ground, escaping death. According to Shariah laws, in such cases the woman must be let go, as her death sentence was revoked by divine intervention. Ten minutes after the failed stoning, however, the poor woman was chased down, apprehended and summarily executed anyway, by a firing squad.

While stoning captures the imagination of Westerners as the most barbaric act committed under Shariah laws, other forms of sentencing perpetrated by the Islamic Republic are just as horrific. For example, Iran employs several types of body mutilation, from the amputation of hands, arms and legs to the macabre procedure of plucking out the eyeballs of the sentenced without the use of anesthetics. Several photos exist to document such occurrences, in dossiers kept by human rights organizations.

The international community, in particular European countries, has been quite indifferent to such atrocities. It prefers to engage the Islamic Republic in lucrative business deals, relegating the human rights issue to a mere footnote, a ritualistic and rhetorical passage usually present in high-level discussions with Iranian officials, but never taken seriously or enforced.

In recent years, as general disaffection towards Iran’s ruling theocratic regime has increased, the number of public executions has also increased significantly. The number of such executions—usually carried out in busy public squares during peak hours, with people sentenced to death hung from cranes—has increased from 75 in the year 2000, to 139 in 2001, to 300 in 2002. Official statistics are not available for 2003 and 2004, but it is estimated that the number of such executions is now several hundred per year. Even minors and those who are physically and mentally disabled are regularly executed.

Sometimes a single mullah serves as judge, jury and executioner...

(bold emphasis mine) There is a great deal more information in the article, about Iranian drug abuse and HIV, the thugs who run Iran like the Mafia, the huge population of restless young people, and many interesting facts, which you can read about HERE.

If ever there was a candidate for liberation, Iran is it. I don't know how else it can be brought into the civilized, modern world.
Posted by Chas at 12:19 PM