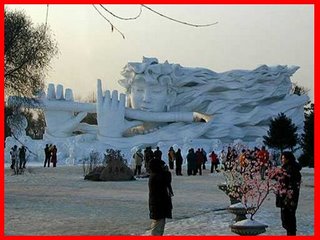 Here is a photo from the Chinese Ice Festival. To see more beautiful photos, Click Here.

Once again, The Washington Post has published the winning submissions to its yearly contest, in which readers are asked to supply alternate meanings for common words.

1. Coffee (n.) the person upon whom one coughs.

2. Flabbergasted (adj.) appalled over how much weight you have gained.

3. Abdicate (v.) to give up all hope of ever having a flat stomach.

4. Esplanade (v.) to attempt an explanation while drunk.

6. Negligent (adj.) describes a condition in which you absent-mindedly answer the door in your nightgown.

9. Flatulence (n.) emergency vehicle that picks you up after you are run over by a steamroller.

14. Oyster (n.) a person who sprinkles his conversation with Yiddishisms.

15. Circumvent (n.) an opening in the front of boxer shorts worn by Jewish men. 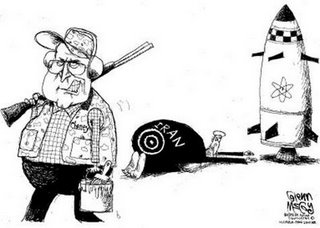 
PONDERISMS
>
I used to eat a lot of natural foods until I learned that most people die of natural causes.
>
Gardening Rule: When weeding, the best way to make sure you are removing a weed and not a valuable plant is to pull on it. If it comes out of the ground easily, it is a valuable plant.
>
The easiest way to find something lost around the house is to buy a replacement.
>
Never take life seriously. Nobody gets out alive anyway.
>
There are two kinds of pedestrians: the quick and the dead.
>
Life is sexually transmitted.
>
Health is merely the slowest possible rate at which one can die.
>
The only difference between a rut and a grave is the depth.
>
Some people are like Slinkies. Not really good for anything, but you still can't help but smile when you see one tumble down the stairs.
>
Health nuts are going to feel stupid someday, lying in hospitals dying of nothing.
>
Have you noticed since everyone has a camcorder these days no one talks about seeing UFOs like they used to?
>
Whenever I feel blue, I start breathing again.
>
All of us could take a lesson from the weather. It pays no attention to criticism.
>
In the 60's, people took acid to make the world weird. Now the world is weird and people take Prozac to make it normal.
>
Politics is supposed to be the second oldest profession. I have come to realize that it bears a very close resemblance to the first.
>
How is it one careless match can start a forest fire, but it takes a whole box to start a campfire?
>
Who was the first person to look at a cow and say, "I think I'll squeeze these dangly things here, and drink whatever comes out?"
>
Who was the first person to say, "See that chicken there? I'm gonna eat the next thing that comes outta its butt."
>
Why is there a light in the fridge and not in the freezer?
>
If Jimmy cracks corn and no one cares, why is there a song about him?
>
Why do people point to their wrist when asking for the time, but don't point to their crotch when they ask where the bathroom is?
>
Why does your OB-GYN leave the room when you get undressed if they are going to look up there anyway?
>
Why does Goofy stand erect while Pluto remains on all fours? They're both dogs!
>
If Wile E. Coyote had enough money to buy all that Acme crap, why didn't he just buy dinner?
>
If quizzes are quizzical, what are tests?
>
If corn oil is made from corn, and vegetable oil is made from vegetables, then what is baby oil made from?
>
If electricity comes from electrons, does morality come from morons?
>
Why do the Alphabet song and Twinkle, Twinkle Little Star have the same tune?
>
Do illiterate people get the full effect of Alphabet Soup?
>
Did you ever notice that when you blow in a dog's face, he gets mad at you, but when you take him on a car ride, he sticks his head out the window?
>
Does pushing the elevator button more than once make it arrive faster?
>
Why doesn't glue stick to the inside of the bottle?
>
Do you ever wonder why you gave me your email address?

BUSH HAS TO GO

I am a senior citizen.

During the Clinton Administration I had an extremely good and well paying job.

I took numerous vacations and had several vacation homes.

Since President Bush took office, I have watched my entire life change for the worse.

I lost my job.

I lost my two sons in that terrible Iraqi War.

I lost my homes.

I lost my health insurance.

As a matter of fact I lost virtually everything and became homeless.

Adding insult to injury, when the authorities found me living like an animal, instead of helping me, they arrested me.

I will do anything that Senator Kerry wants to insure that a Democrat is back in the White House come next year.

Bush has to go. 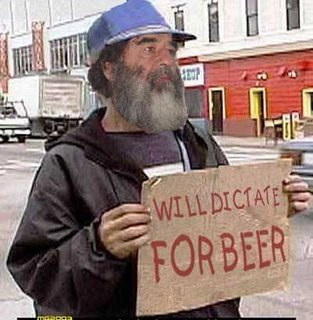 The wife comes home early & finds her husband in their master bedroom making love to a beautiful, young lady!

"You unfaithful, disrespectful pig! What are you doing? How dare you do this to me the faithful wife, the mother of your children! I'm leaving this house, I want divorce!"

The husband, replies "Wait, Wait a minute! Before you leave, at least listen to what happened. You can't say I'm dishonest."

"Hmm, I don't know, well, it'll be the last thing I will hear from you. But make it fast, you unfaithful pig, you!"

The husband begins to tell his story . . . "While driving home this young lady asked for a ride. I saw her so defenseless that I went ahead and allowed her in my car. I noticed that she was very thin, not well dressed and very dirty. She mentioned that at she had not eaten for 3 days.

With great compassion I brought her home and warmed up the enchiladas that I made for you last night that you wouldn't eat because you're afraid you'll gain weight; the poor thing practically devoured them."

"Since she was very dirty I asked if she wanted to take a shower.

While she was showering, I noticed her clothes were dirty and full of holes so I threw her clothes away. Since she needed clothes, I gave her the pair of jeans that you have had for a few years, that you can no longer wear because they are too tight on you, I also gave her the blouse that I gave you on our anniversary and you don't wear because I don't have good taste."

"I gave her the pullover that my sister gave you for Christmas that you will not wear just to bother my sister and I also gave her the boots that you bought at the expensive boutique that you never wore again after you saw your co-worker wearing the same pair."

"The young woman was very grateful to me and I walked her to the door. When we got to the door she turned around and with tears coming out of her eyes, she asks me:

"Sir, do you have anything else that your wife does not use?" 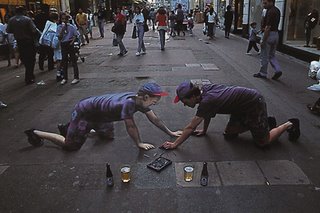 The Ted Kennedy Children's Book Cover of the week: 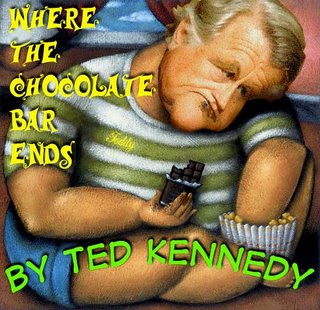 To Track Down My Dream

It was the district track meet - the one we had been training for all season. My foot still hadn't healed from an earlier injury. As a matter of fact, I had debated whether or not I should attend the meet. But there I was, preparing for the 3,200-meter run.

"Ready...set..." The gun popped and we were off. The other girls darted ahead of me. I realized I was limping and felt humiliated as I fell farther and farther behind.

The first-place runner was two laps ahead of me when she crossed the finish line. "Hooray!" shouted the crowd. It was the loudest cheer I had ever heard at a meet.

"Maybe I should quit," I thought as I limped on.

"Those people don't want to wait for me to finish this race." Somehow, though, I decided to keep going. During the last two laps, I ran in pain and decided not to compete in track next year. It wouldn't be worth it, even if my foot did heal. I could never beat the girl who lapped me twice.

When I finished, I heard a cheer - just as enthusiastic as the one I'd heard when the first girl passed the finish line. "What was that all about?" I asked myself. I turned around and sure enough, the boys were preparing for their race. "That must be it; they're cheering for the boys."

I went straight to the bathroom where a girl bumped into me. "Wow, you've got courage!" she told me.

I thought, "Courage? She must be mistaking me for someone else. I just lost a race!"

"I would have never been able to finish those two miles if I were you. I would have quit on the first lap. What happened to your foot? We were cheering for you. Did you hear us?"

That day I learned two things:

First, a little kindness and confidence in people can make a great difference to them.

And second, strength and courage aren't always measured in medals and victories. They are measured in the struggles we overcome. The strongest people are not always the people who win, but the people who don't give up when they lose.

I only dream that someday - perhaps as a senior - I will be able to win the race with a cheer as big as the one I got when I lost the race as a freshman. 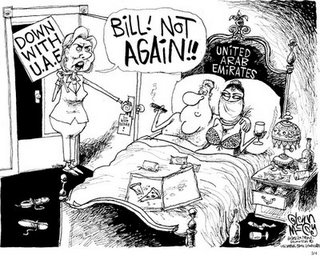 I think he is becoming one of my favorite cartoonists, too. Also www.coxandforkum.com.