"Copenhagen syndrome" and the Left 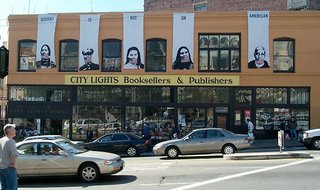 Remember the "Stockholm syndrome"? That phrase used to describe the psychological phenomenon where hostages begin to sympathise and work with their terrorist captors? It's a concept I've thought about a lot in the last two years since I moved away from San Francisco. Many of the leftists there would bend over backwards to support and defend Islamism, despite it's track record of crushing feminists, gays and free speech.

These same leftists would often embrace totalitarians of every description, with equally bad records of crushing the very things the left claims to embrace. Simultaneously, these leftist "liberals" also attacked vigorously the liberal western traditions that allow the Left to florish like they can do nowhere else. A city full of people, acting like a fool who frantically saws away at the branch he is sitting on. It's one thing to disagree or dissent about an issue, but quite another to actively attack and reject your own culture that supports your right to dissent, while rushing to embrace one that loathes it.

I recently read an article from the LA Times by Cathy Seipp called "The fascists of free speech". It describes perfectly the new "Copenhagen syndrome" afflicting a large portion of the left in this country and in Europe. It starts off with a visit to the famous City Lights Bookstore in San Francisco, a store that prides itself on supporting banned authors and selling controversial books that other stores won't. Here is an excerpt:

... he asked a clerk if the new Fallaci book was in yet.

"No," snapped the clerk. "We don't carry books by fascists."

Now let's just savor the absurd details of this for a minute. City Lights has a long and proud history of supporting banned authors — owner Lawrence Ferlinghetti was indicted (and acquitted) for obscenity in 1957 for selling Allen Ginsberg's "Howl," and a photo at the bookstore showed Ferlinghetti proudly posing next to a sign reading "banned books."

Yet his store won't carry, of all people, Fallaci, who is not only being sued in Italy for insulting religion because of her latest book but continues to fight the good fight against those who think that the appropriate response to offensive books and cartoons is violent riots. It's particularly repugnant that someone who fought against actual fascism in World War II should be deemed a fascist by a snotty San Francisco clerk.

Strangest of all is the scenario of such a person disliking an author for defending Western civilization against radical Islam — when one of the first things those poor, persecuted Islamists would do, if they ever (Allah forbid) came to power in the United States, is crush suspected homosexuals like him beneath walls.

Yet those most oppressed by political Islam continue to defend it, even (perhaps especially) in the wake of the Danish cartoon furor. I've heard that in Europe this phenomenon is now called the Copenhagen syndrome, and some of its arguments really are amazing...

The article goes on to give us some disturbing examples of those arguments. It's well worth reading, you can read the entire piece HERE.

I used to work near City Lights Books when I lived in San Francisco. They have lots of communist and socialist books, and take great pride in publishing and selling books that nobody else will. I don't like most of what they have to offer. So be it.

I'm not criticizing their right to sell communist books. I'm criticizing them for labeling Oriana Fallaci a fascist. She, who at the tender age of 14, joined the Italian resistance against Mussolini, a genuine fascist. She, who is now being attacked and threatened by fascist Muslims, who have no respect for free speech at all. She, who is literally fighting against those who want to suppress books, who is facing death threats and calls for her head. For Fallaci to be called a fascist by a bookstore supposedly committed to selling suppressed books and supporting free speech, is ironic to say the least. What is wrong here?

The truth is, Fallaci is an anti-totalitarian, who has equal disdain for fascists AND communists, and I suspect that it's her anti-communism that bothers the folks at City Lights. They couldn't care less about HER rights to free speech, so they just label her a fascist so they don't have to deal with her. It's dishonest, but when you believe that the end justifies the means, that's no big deal. 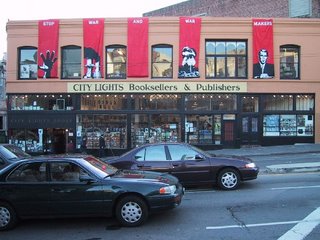 Is that a sawing noise I hear...

Why the Left doesn't blame Muslims for Muslim violence

The Left's Guiding Principle And Where It Goes Wrong

CATHERINE SEIPP writes a weekly column for National Review Online and blogs at www.cathyseipp.net.
Posted by Chas at 12:02 PM

"Stuck On Stupid" is a phrase that truly describes whoever is running "City Lights." It also describes many others.

How they can defend Islam is beyond my understanding. Actually it boggles my mind. My only conclusion is that they have somehow lost the ability of rational thought.

Extremely valid points made in the article you posted. Anywhere else but California City Lights would probably be run out of business, but being where it is I know it's probably doing a booming business.