Not hanging around or hanging out, but actually being hanged... 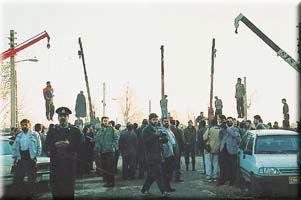 Hanging is the most common form of execution in Iran. Group hangings are prefered in urban areas, where they can get the most visibility. Can you imagine being out on your lunch break one day, or commuting to work, or on your way to do shopping or anything, and passing by this scene? How would you feel? Imagine living in a culture where this is "normal"... 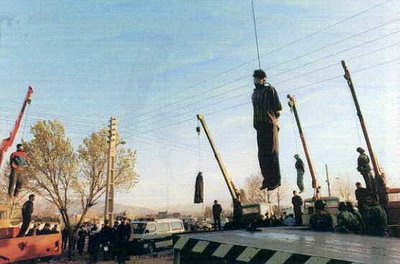 Too often I have marveled at the new uses Muslims find for the everyday technologies many of us use daily. Muslims turn passenger planes into flying suicide bombs, cell phones into remote controls for detonating bombs, and here, they use the simple construction crane as an execution device.

But why not use a gallows? The cranes have special advantages over a gallows or trap door drop, that many other countries use. A sudden drop like is used with a trap door, breaks the neck of the person being executed, and they loose consciousness immediately.

By using a crane, the loss of consciousness in avoided. The crane allows the person to be lifted up slowly, so they strangle as they dangle. The hands are tied behind their backs, but the feet are left free to kick, as the person slowly strangles and suffocates. The strangulation part takes about 3 minutes. The whole execution from beginning to end takes about 25 minutes. 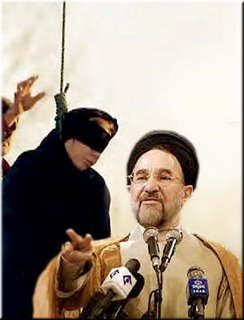 This group was four men and one woman. I read that this young woman (age 23?) was lashed 80 times first.

Why were they being hanged? They were alleged to be drug traffickers. But do we know that for certain? There are many claims that dissidents are often falsely accused of crimes and executed, without a fair trial. What passes for a trial is sometimes nothing more than two minutes of questioning by a Mullah. No defense attorney, no jury.

I read that over the past several years, the amount of public hangings has been rising, and may even be in the hundreds per year. You can only wonder at how such spectacles affect people, the society as a whole.

Do they get used to it? Do they become desensitized? Here are pictures from another hanging of three men. Here are the onlookers: 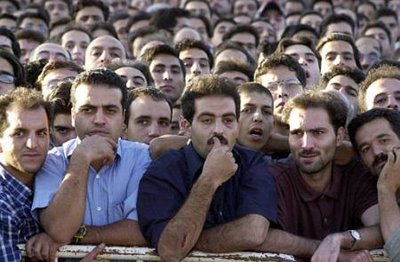 It's quite a crowd. All men. What are they thinking?

Not everyone is so stoical. This guy seems upset: 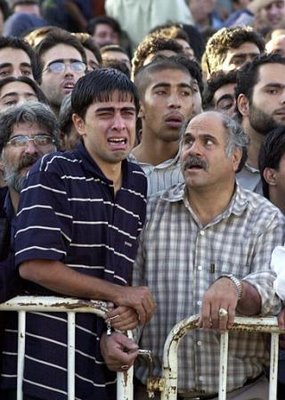 Is he watching a friend or family member about to be hanged? 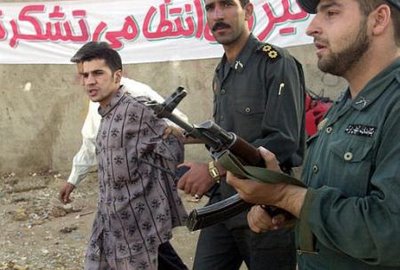 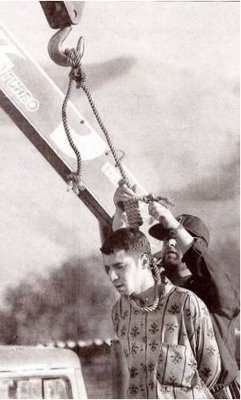 The other men are noosed... 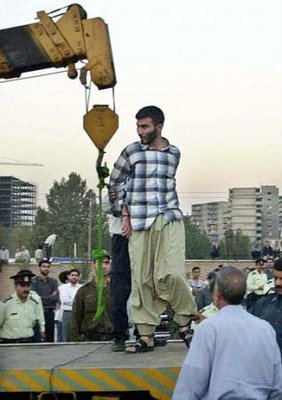 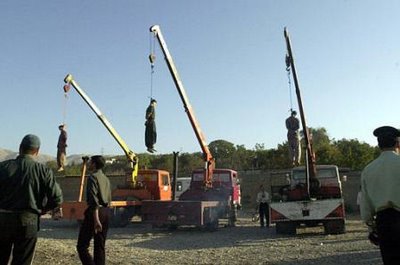 One of the most notorious executions in Iran occurred in 2004, with the hanging of 16 year old Ateqeh Rajabi. She was hanged for "engaging in acts incompatible with chastity".

The details of her personal story are tragic. She was abused by men from an early age, and had no one to defend her.

She had no defense attorney. In court she took off her headscarf and addressed the judge, hurling insults at him and telling him he should be DEFENDING her, not attacking her. This so infuriated the local judge, Haji Reza, that he personally saw to it that she received the death sentence.

I read that she publicly repented, crying for her life, right before being hanged; and that under Islamic law, her repentance should have led to a postponement of her execution and a reconsideration of her sentence. But the judge would have none of that. He personally placed the noose around her neck, and gave the order for the crane to be lifted.

After the execution, "judge" Reza boasted that the girl was not put to death for her crime, but for her "sharp tongue". The court published the girls age as 22, even though her birth certificate and her national I.D. card show that she was only 16. Her hanging has caused a shockwave in Iran, as almost no one believes she deserved the sentence she received.

The Mullah's are a law unto themselves. Can you imagine what whey would do with nuclear weapons?

The Most Wanted Mullahs In Response To 16 Year Old Girl

The Public Hanging of a Sixteen Year Old Girl in Iran

Why the Mullahs Murdered Atefeh Rajabi

As mass public hangings in Iran continue to increase, so do videos of them that have been smuggled out of the country:

Years later, the hangings still continue, with a vengeance: 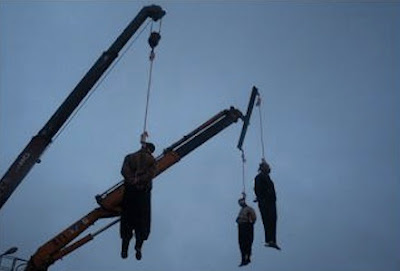 Sadistic Mullahcracy in action - a mass hanging in Iran

Iran Hanging One Person Every 12 Hours

The Teheran regime has hanged 66 individuals since the end of 2010, according to France 24 International News.

Among them was a 46-year-old Iranian-born, Dutch national Sahra Bahrami, who was hung on January 29 on drug-smuggling charges.

Holland’s Foreign Ministry said it was “shocked, shattered by this act by a barbaric regime,” according to Agence France Presse.

Bahrami’s sister dismissed the Iranian charges, which she contended were fabricated.

“She doesn’t even smoke cigarettes, let alone possessing drugs. How could someone who participates in election gatherings and endangers her life, engage in such actions against her country?” she is quoted as telling the International Campaign for Human Rights in Iran.

“I am bewildered as to how my client’s death sentence was issued while her security charges had not yet been reviewed,” Bahrami’s attorney said after her death.

The Hague froze relations with Iran in the wake of the killing.

Iranian officials arrested Bahrami during anti-government protests in 2009, and held her on “security charges.” She had been visiting Iran to see her relatives.

Catherine Ashton, The European Union’s representative in talks with Iran over their nuclear program, said “Executions are taking place at an alarming rate.” [...]

Read the rest. They are hanging political dissidents, on trumped up charges, without trial. Why didn't the White House support the Iranian Uprising, the way they recently did with Egypt? That was a missed opportunity. The Iranian protesters are now being killed for it.

Radio Netherlands will begin broadcasting news bulletins to Iran in the Farsi language, in response to Sahra Bahrami's execution.

Sharia law, Muslims Following satan to the end. Whoever wrote the koran set a curse upon this earth, Probably on purpose and laughing their ass off.

I am absolutely amazed at the evil that goes on in Iran.

I think Ranando's comments are totally out of line.

This is horrific and really upsets me that this is going on in our world in 2006. Thank God I live in America because with my "sharp tongue" I'm sure I'd be dead if I lived in Iran.

I used the Darth Vader cartoon in my post today and linked to you!!

I don't see any Human rights activists saying a lot!!
The legal profession are noticable by their comments...NONE!

Islam is not a religion - just a sham made up by the false prophet, Muhammad - so the barbaric actions of its followers are no surprise. What disappoints me is that we allow Islam to exist in the United States, when it is common knowledge that all muslims are enemise of western civilization.

What is human right commission that is nothing but an organisation that could console the relatives of accused so that they dont agitate and the judge has to be put under trouble . I saw many people have been given death sentence and human rights kept crying actually it is an effigy that will not do nething to prevent those killers who with a plan kill and say they doing justice .
I dont know in this educated world how can we believe that if we kill a killer we will do justice with the victim but we are not killer . I am in india and this country is as cruel as muslim countries are . Muslim countries are cruel it could be understood due to two reasons . First is that mostly there people are illiterate and second is that muslims believe allah so much that they dont hasitate in giving and taking lives . But what about india which shouts everywhere that its culture is supreme over 100 crore people live here but they cant prevent even a one man from being hanged . Dhananjoy case was the biggest example in which despite no eyewitness he was given death sentence and despite he kept wailing he is innocent . Worse was that even after his death all the people who were saying he shouldnt be hanged vanished and none ever said anything I wish to be in a country that isnt this much cruel

it actually annoys me that muslims r so bloody cruel i know that i am generalising but they reeli do destroy their reputation and they wonder why we hate them all if a muslim got on my plain i wood be scraed for my life thats wot things have come to concerning them if they want that thats their fault. i hate it how they still wear veils omfg its not religiouse theres nuthing in the koran that says that and woman have been fighting for years to get rid of veils so why do they insist onmcoming to this country and put on their veils live of councill beinifits and bomb airports bloody lunitics.

This culture of punishment and sadistic behaviour has to end before it consumes the entire world. Action is needed and that NOW!

This is just pure evil!

Evil: Evil is intentionally causing harm or destruction, or deliberately violating some moral code. The philosophical question of whether morality is absolute or relative leads to questions about the nature of evil. Evil is usually seen as the opposite of good.

All trading between Iran and the other countries should be halted.
No countries should allow or allow any trade of good, service or anything else with this fanatic regime.
The regime must be purnished in all ways it can. He is not a lesser treat to us in the north region of the planet that he are to the guys which are being hanged for their sexual orientation, the regime is probably preparing to give us a far painful purnishment by the doomsday weapon as they killing their own residentes for non-crimes with cranes.

The US must act. The US must prepare a military operation against Iran and help the people getting rid of the regime, nor country should help or allow any regime like that to continue further existence.

We have to track (nearly impossible) all goods we're going to buy to enasure no parts of it are imported from this regime.

They could hang the whole world by their soon nuclear weapons. An nuclear blown up somewhere on the earth would be fatal for all individuals on the the planet.

And one important thing: The regime are NOT muslims, they are fanatics. I heard that the Islam wasn't like this in the beginning but used as an engine for fanatatism. So muslims are not the problem, it's the regime!