I didn't post anything yesterday. I was going to post about the Italian Author and Journalist, Oriana Fallaci. But as I read more and more about her, the task seemed too overwhelming. Such a life she has had! She has travelled the world as a war correspondent, and seen things, death and destruction, on a scale most of us could not imagine. She has conducted interviews with powerful and controversial people (including Gadaffi, Komeni, Arafat) written books... I could go on and on. What a facinating, interesting woman.

I had mentioned her in a post below, and how she had written a book, called "The Rage and The Pride". It created a controversy in Europe, and in her native Italy, she is now being sued by Muslims for defaming Islam.

I would like to write more about her when I have a chance, but for now, I thought I would print a link to an article she did, called "Rage and Pride", originally published September 29, 2001 on the web site of the Il Corriere della Sera. I think this article may be the begining of what she eventually developed into the book of the same title. The article is now availble in English translation, on www.borg.com. Here is an excerpt from the introduction: 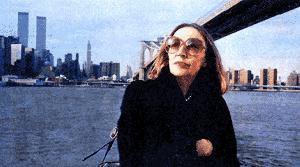 Oriana Fallaci, with this extraordinary piece, has broken a silence of a decade. Extremely long. Our most renown writer (she uses the masculine form of the word and no longer uses the word journalist), lives for the majority of the year in Manhattan. She does not answer her phone, rarely opens her door, and goes out very infrequently. She never gives interviews. Everyone has tried, no one has succeeded. She is isolated. However, history and destiny decreed that the center of our modern day apocalypse, like a chasm from Dante, would open at a short distance from her beautiful and literary residence. The wave of the blast of September 11, also disrupted her hermetic silence and the hermit herself. She opens her door, an unusual act which seems to surprise her… her demeanor is sweet and simultaneously fierce. She has been working for years on a book anticipated by the entire world, among piles of documents, in orderly disorder, at a feverish pitch. I had asked her to write what she had witnessed, felt, heard, after that Tuesday and Oriana has gathered on a few sheets, emotions, thoughts. “On every experience I leave shreds of my soul”, she had written a few years ago. It is still true, very true. Strong ideas, disruptive ones, on which to ponder and discuss. On America, Italy, the Islamic world. On her Mother land (surprising what she says of her Mother land). Invectives and texts that flow simultaneously from the brain and the heart, or rather from the brain through the heart. “Someone had to say these things. I have said them. Now leave me in peace". The door is closed again. "I do not want to re-open it.” She blusters. Her usual artillery. She is going to cause a stir. And how!

This lady is for real, she says what she means, and doesn't mince words. I don't think I've read anything quite like it, especially from a European. You can read Oriana's article Here.
Posted by Chas at 12:12 AM