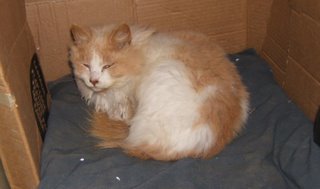 So I guess we may have to keep it (I still don't know if it's a she or a he, all that hair...) The dogs had cornered it on our back porch the day before yesterday. It looks like it was once very beautiful, but has seen better days. It seems to have been on it's own for some time now.

At first I thought I saw an owners tag under the neck, but it turned out to be a lump of matted, dirty fur. It had several lumps of matted fur on it, so I cut them off with scissors. It let me do this without fussing; it's a very gentle animal; it purrs easily and is quite affectionate. It had once been somebody's baby.

It is a small cat, and so thin and light it felt like picking up a ghost. It wouldn't leave our back porch, so we have put it in the shed, which has it's own cat door. It sleeps a lot, it seems to be recovering from nearly starving to death.

Our other two cats hate it, but they don't actively fight with it. So we are going to let it regain it's health and strength, and see how it goes from there. For now, I'm calling it "Fluffy".
Posted by Chas at 4:25 PM

Bless you guys for taking care of the cat. It does look like it could be a very beautiful cat.