THE CLASH THAT CAN'T BE

(Title from Jack Kelly's article) Is the MSM advancing it's own agenda by promoting the views of offended Mulsims over those of moderate ones? We continually hear the views of extremist groups like CAIR (which is funded by the fanatical Wahabbi sect) presented to us as moderate voices, while true moderates are ignored. Is this deception deliberate? 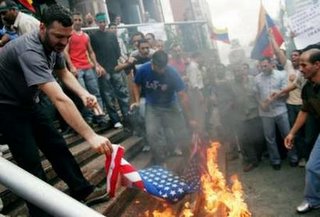 Could it be that the "Ports" controversy is partly fueled by Americans being fed up with offended, rioting Muslims; that Americans are starting to demand proof that Islam is, actually, compatible with a free society?

Jack Kelly examins these questions and more in his most recent article. An exerpt:

...Americans know instinctively that the "Islam is a religion of peace" mantra is bunk. Islam was spread by the sword. There are no Christian, Jewish, Hindu or Buddhist suicide bombers.

And Americans know it is idiotic to search grandmas at airports while young Muslim males stroll through checkpoints. We were not attacked on 9/11 by the Swedish bobsled team.

It is true that up to about 400 years ago, Christianity was no friend of democracy or religious pluralism. But that was 400 years ago. The key question, which political correctness obscures, is whether Islam can become (in, we hope, rather less than 400 years) as benign a faith as Christianity is today.

I think the answer is yes, because I know of many Muslims who are devoted to liberty, democracy and social equality. I wrote about "the trainer" (who infiltrated a terror cell in Toledo) in last week's column. Our ambassador to Iraq, Zalmay Khalilzad, is an example. So is businessman and terror fighter Mansoor Ijaz.

You don't hear much about genuine Muslim moderates because if you did, it would expose the cravenness of a news media that largely has capitulated to the demands of Islamic radicals. That capitulation can be portrayed as something other than cowardice only if the vast majority of Muslims are depicted as being offended by the exercise of free speech.

So journalists describe as "moderate" those -- like the smarmy creeps at the Council on American-Islamic Relations -- who largely share the goals of the Islamists, but who eschew their methods. Ordinary Americans see through this, and wonder if there are any moderate Muslims at all.

Fewer would think that way if they knew, for instance, that most Danish Muslims are shunning the four radical clerics who brought on the Cartoon War, or if they read the recent declaration of 12 mostly Muslim or Muslim apostate intellectuals who distinguish sharply between Islamism ("a reactionary ideology which kills equality, freedom and secularism") and the basic tenets of the Muslim faith.

It is easier to find moderate Muslims who are willing to speak out than to find journalists who will pay much attention to what they have to say. Afghans, Iraqis and Lebanese struggling for liberty and democracy are given short shrift because to give them proper credit would be to give indirect credit to George W. Bush...

(bold emphasis mine) Jack Kelly tells it like it is. You can read the whole article HERE.

The Left's Guiding Principle And Where It Goes Wrong

Many prominent leftist actions often seem puzzling to the rest of us. When leftwingers ally, for example, with Islamists against America, their position is so recklessly shortsighted that we wonder just how they can act so blatantly against themselves. Islamists in power would completely destroy everything the left holds dear, from freedom of speech to gay rights to feminism, but that doesn't stop groups like the employees of San Francisco's City Lights Books (as mentioned in my previous post) who have openly sided with the jihadists by refusing to sell Oriana Fallaci's pro-Western text The Force Of Reason. That this stance contradicts the leftists' own interests is quite obvious. But why can't they seem to see it? How blinded by ideology can one possibly be?...

you can read the rest HERE

No Sympathy For Offended Muslims

...I will learn about Islam only if I find it interesting, and I will not be behaving according to its tenets because I am not a Muslim. Muslim law has no jurisdiction in my life, that is a Western lesson for Muslims to learn. And if you don't like our approach to freedom of belief, then, don't go west Iman! If I decide to create or display an image of the Prophet, tough, get over it. Because, even if the Koran does forbid such depiction, a principle which may not be true, the prohibition does not apply to me; I am a non-believer. And in the same way that I am not concerned with avoiding consumption of meat on Friday, because I am not Catholic, do not expect me to adhere to the rules of YOUR religion either. Won't happen pal. Tell that to your people; don't try to tell the rest of us how to be Muslim. Who cares what motivates Muslims to be hateful, just stop it already. That act is tiring...

You can read the whole thing HERE. And H.T. to The Black Republican blog for the photo, too.


Some American-Muslims Learning Tolerance
An excerpt:

...But, then once again I am disappointed when he continues.

"All that we are expecting is that they don't insult a personality that's made such a historical contribution. This is more a responsibility of living in a pluralistic society than a question of legal restrictions."

The intolerable word is, "expecting", which connotes a demand. A single concept which belies that Dr. Syeed wants others to be responsible for obeying his religion. The antithesis of the autonomy of religious thought characteristic of a pluralistic society...

You can read the whole piece HERE.
Posted by Chas at 9:25 AM