"THE FORCE OF REASON" is here 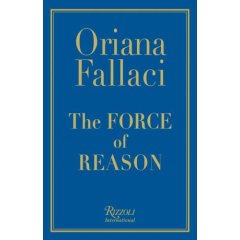 The english language version of Oriana Fallaci's latest book, The Force of Reason, has recently been released. I haven't read it yet, so I can't say a lot about it, but the TigerHawk blog has an interesting post about it, including five pages of text from the book.

I remember being taught at school, being told that the crusades were an evil CHRISTIAN aggression against the poor Muslims, who were ever-so tolerant of Jews and Christians. Fallaci calmly disabuses us of those notions, with a politically incorrect but historically accurate accounting of the gory details of Muslim invasions, and the horrors of their occupations. I won't repeat them here, but will repeat this paragraph about how the Crusades were a RESPONSE to an ongoing invasion:

... Today it's fashionable to beat our breast over the Crusades. To blame the West for the Crusades. To see the Crusades as an injustice committed to the detriment of the poor-innocent-Muslims. But before being a series of expeditions to regain possession of the Holy Sepulchure that is of Jerusalem (which had been taken by the Muslims, remember, not by my aunt), the Crusades were the response to four centuries of invasions and occupations. They were a counter-offensive to stem Islamic expansionism in Europe. To deflect it, mors tua vita mea, towards the Orient (meaning India and Indonesia and China) then towards the whole African continent and towards Russia and Siberia where the Tartars converted to Islam were already crushing the followers of Christ. At the conclusion of the Crusades, in fact, the sons of Allah resumed their persecutions as before and more than before...

(bold emphasis mine) She goes on to describe how the Turks went on to build an army using methodes that even the Nazi's wouldn't use... in just the five pages that TigerHawk has printed, Fallaci packs a lot of information, it's worth visiting his site to read it, along with his comments.

Tammy Bruce has also written a post about the new book, and also endorses Fallaci's previous book, "The Rage and The Pride", which she read and found inspiring. Tammy says about Fallaci: "I have a special place for her because she, too, emerged from the Left and saw the light."

The Solid Surfer has a post where he talks about how City Lights bookstore in San Francisco refuses to sell Fallaci's book, because it is critical of Muslims. "We don't carry books by fascists." the store clerk says. That's incredibly ironic, considering that at the age of 14, Fallaci joined the Italian resistance to fight the fascist Mussolini regime. She has fought against fascism and totalitarianism her whole life.

I lived in San Francisco for 23 years, and the office I worked in was not far from City Lights Books. They had every kind of communist and leftist book you could imagine; they prided themselves on carrying books nobody else would sell.

They are just so, like, open-minded and liberal, like, you know? They are currently selling the books of the fake Indian - discredited professor Ward Churchill, famous for calling the 9/11 victims "little Eichmanns". No problem there, they LIKE his books, probably because they think just like him. But Fallaci is a "fascist" because she's criticising Muslims. Musn't allow that!

This suicidal aspect of liberals amazes me. Islamists in power would completely destroy everything the left suposedly values, like free speech, gay rights and feminism, but that doesn't concern San Francisco leftists like the ones at City Lights Books.

It sounds just like the San Francisco I knew and grew to hate. When I moved away, I not only didn't leave my heart there, I also took care to shake the dust from my feet as I left. My only regret was not leaving sooner.

The Solid Surfer has an excellent post about that self-destructive attitude of the far left, that is worth a read, too.
Posted by Chas at 12:33 AM

No, you didn't "leave your heart in San-Francisco", you brought it with you. It's obvious it's still alive and well, and I'm glad.

It's unbelievable the way liberals think. It boggles the mind to know that they believe Muslims are the poor underdog. There can only be one possible explanation for their total denial of the truth, but I don't know what it is. It's too easy to say they are "brain dead." Or they have "fried their brains with drugs." Or any of the other uncomplimentary things we conservatives are tempted to say (and I have said myself). Many say liberalism is a "disease." Perhaps that is true. What I do know about liberalism is that it is mysterious. It makes no sense. It doesn't "jive" with rational thought.

When I was a child and lived in San Francisco I loved it. But I was only seven years old when I lived there. I thought it was beautiful (and it was) and I loved the huge shrimp sold in restaurants near the docks. That was in the 1940's and now we are in 2006 and I haven't been to SF since 1961 on a short visit to a half-sister I barely knew, but the city was beautiful then too. But the half-sister was a died-in-the-wool moonbat. I haven't been back since.

Wow, you sure brought back some memories. I've written an entire post here! :)

Many say liberalism is a "disease." Perhaps that is true. What I do know about liberalism is that it is mysterious. It makes no sense. It doesn't "jive" with rational thought.

Tammy Bruce explained a lot for me, about the destructive tendencies of liberals. In her book "The Death of Right and Wrong", she maintains that many people on the left have a victim identity, have had experiences of being victimized, that they never have recovered from. Victims need to face their issues, work them out, and then reintergrate, re-join life, not as a victim, but as a survivor, and as their ordinary selves.

Many on the left face their issues by joining groups, where they find people who share their pain. But then, they fail to move on to the third stage of recovery. They stay stuck in their identity as victims; they focus on social change rather than INDIVIDUAL change, and their victimhood identity becomes their empowerment; recovery is then the ENEMY, because if you recover you lose your victim identity.

The Democrat party is full of people who think of themselves as victims, and their leadership has an invested interest in KEEPING them there. The group maintains the victimhood of the individual, who then transfers his/her trauma ONTO SOCIETY. They don't learn to take personal, individual responibility for their lives, they blame society and culture for all their unhappiness and problems, and they vote DEMOCRAT.

It's a pathology of narcissism, and when that third stage of recovery is missing, it can progress to malignant narcissism, which is irrational and destructive to the narcissist and those around him. Does that not describe left-wing moonbats perfectly? And the leftists are condemned by their own politics to never escape their victimhood.

Have you noticed how often for liberals, nothing ever gets better; it CAN'T, because they would lose their victim identity, which is also their power base. I think this so often explains why their actions to make things better, often makes things worse, or if it doesn't, they claim it's still bad. They NEED victimhood.

Tammy describes it a lot better, in the chapter of the book called "Through the looking glass".

San Francisco in the 1940s was a Republican town. When I arrived in 1980, it was very liberal, but still laid-back and easy going. But when we left 23 years later, it was just full of angry people. An epidemic of malignant narcissism.

It's so different here. We went through a culture shock, when we finally realized that it was NORMAL to be around people who weren't angry all the time.