The following is from an email that has been going around the internet: 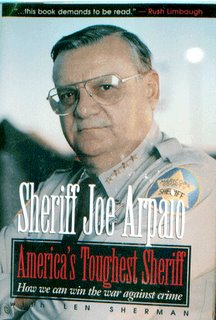 TO THOSE OF YOU NOT FAMILIAR WITH JOE ARPAIO,
HE IS THE MARICOPA ARIZONA COUNTY SHERIFF
AND HE KEEPS GETTING ELECTED OVER AND OVER.

THIS IS ONE OF THE REASONS WHY:

He has jail meals down to 40 cents a serving and charges the inmates for them.

He started chain gangs so the inmates could do free work on county and city projects.

Then he started chain gangs for women so he wouldn't get sued for discrimination.

He took away cable TV until he found out there was a federal court order that required cable TV for jails. So he hooked up the cable TV again only let in the Disney channel and the weather channel.

When asked why the weather channel he replied, so they will know how hot it's gonna be while they are working on my chain gangs.

He cut off coffee since it has zero nutritional value.

When the inmates complained, he told them, "This isn't the Ritz/Carlton. If you don't like it, don't come back."

He bought Newt Gingrich' lecture series on videotape that he pipes into the jails.

When asked by a reporter if he had any lecture series by a Democrat, he replied that a democratic lecture series might explain why a lot of the inmates were in his jails in the first place. 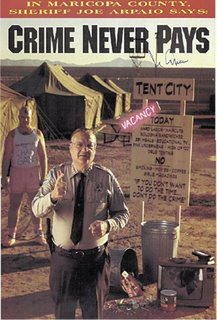 I checked it out at Snopes.com, to see if any of it was true. I was suprised to find out that except for some minor details (mostly explanations of WHY he did certain things), it seems most of it is true.

From www.truthorfiction.com
... Arpaio has also instituted what he calls "Hard Knocks High", the only accredited high school in an American jail.

That, along with an anti-drug program, says Arpaio, has resulted in a high percentage of his inmates leaving jail without their addictions and few of them returning...

But not everyone is thrilled with him: urbanlegends.about.com

Sheriff Arpaio fights for bestiality law.
(H.T. to Nealz Nuze.)
Posted by Chas at 12:06 AM

I've seen him on the news once or twice. He'd put the fear of the law in me. Interesting, and tough, man. But he appears to be a very fair man, too.

Gee, the libs don't like him? Sounds like the kind of sheriff I wouldn't want to meet on the wrong side of the law!