I first read about this at Michelle Malkin's blog, about an interview with Arab-American psychologist Wafa Sultan on Al-Jazeera TV. During the interview, Dr.Ibrahim Al-Khouli accuses Sultan of being a "heretic" for criticising current aspects of Islamic society. 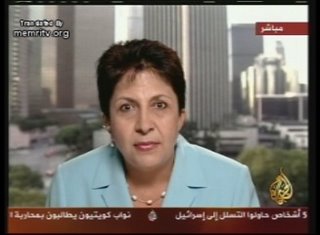 I had read the transcript before, but if you look at the video clip, in which they are speaking in Arabic (there is english subtitles), it's a wonder to behold. This smart and brave lady holds her own ground with this creep Dr. Al-Poisen Koolaid. The whole transcipt is packed full of good stuff, but here are just a few exerpts from this remarkable woman:

Wafa Sultan: "When the Muslims divided the people into Muslims and non-Muslims, and called to fight the others until they believe in what they themselves believe, they started this clash, and began this war. In order to start this war, they must reexamine their Islamic books and curricula, which are full of calls for takfir and fighting the infidels...

"My colleague has said that he never offends other people's beliefs. What civilization on the face of this earth allows him to call other people by names that they did not choose for themselves? Once, he calls them Ahl Al-Dhimma; another time he calls them the 'People of the Book'; and yet another time he compares them to apes and pigs, or he calls the Christians 'those who incur Allah's wrath.' Who told you that they are 'People of the Book?' They are not the People of the Book, they are people of many books. All the useful scientific books that you have today are theirs, the fruit of their free and creative thinking. What gives you the right to call them 'those who incur Allah's wrath,' or 'those who have gone astray,' and then come here and say that your religion commands you to refrain from offending the beliefs of others?" ...

(bold emphasis mine) There is lots more, you can read more of it here, but if you are able to, have a look at the video too; it captures the vibes in a way a mere transcript can't. If she is a Heretic and an Infidel for saying what she says, for speaking up and saying what NEEDS to be said, then what the heck does that make HIM? A small minded, backward, primative, superstitious little hitler in a nice suit?

THANK YOU, Wafa Sultan, for speaking up.
Posted by Chas at 12:21 AM

Who knows what your real name is? You leave no clue about your real identity, so you are anonymous.

My site meter shows you were doing a google search about Wafa Sultan, which brought you here. You stayed only long enough to post these links. That makes you an anonymous spammer, which I have no respect for.

Despite that, I looked at the links, and watched them all through, painful as it was.

I don't see that it in any way diminished what Wafa Sultan said. In fact, it underscored it.

No wonder she spoke so vociferously when she had the chance. Most of the time she was not allowed to get a word in edgewise. She had to listen to this crazy old fanatic shouting endlessly.

I can't even begin to count all the factual errors he made. And all the comments about American Imperialism, etc, these clips are very good examples of why so many Western leftists embrace and defend Islamic fanatics. Politically, their hatreds are so similar.

I could agree that no one should be jailed for denying the holocaust -that was in England anyway- but the rest? No wonder you are anonymous.

It's scary that anyone could believe such backward, unenlightened rubbish. And scarier still, that you are posting it from within the United States- the Kansas City Missouri area, it looks like. If these are your views of America, then what the hell are you doing here? I'm sure many Americans would like to know. Particularly your neighbors.