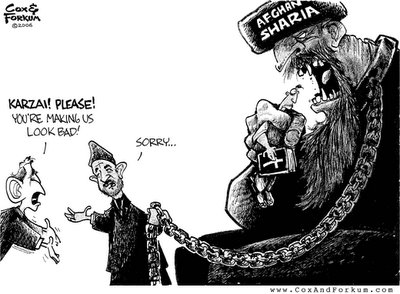 Hat tip to Cox and Forkum for the cartoon. You can read their related commentary HERE.

Islam has been rigidly imposed on people for centuries; they have had no choice. Democracy is a complete threat to that. If choice is allowed, if people are allowed to question, the whole thing falls apart. At the very least, Islam would be forced to evolve, to reform.

I think that the best way to reform or neutralize the intolerant culture of Islam is democracy. Even if it has to be imposed at first.

That's not to say it would be quick or easy. But the place to start would be to support truely moderate Muslims, and educated secular Arabs. And to stop putting up with the Politically Correct crap about respecting Sharia law. This stuff continues unabated because we (the west) have tolerated it for so long. By tolerating it we enable it. That way has lead to where we are now. I say enough.

Supposedly the new Afghanistan constitution agrees to abide by the UN Charter and the Universal Declaration of Human Rights. But is seems like many in the Muslim world make agreements lightly to get foreign aid and support, then ignore those agreements at will, as suits them. Afghanistan is a good case in point, as demonstrated in this article by Nina Shea:

Sharia Calling
America, we have a problem
By Nina Shea. Some excerpts:

...Rahman is not the only case where execution has been threatened over beliefs and ideas in the new Afghanistan. Last year, an Afghan journalist who argued against the heresy law was found guilty of it, and escaped death after international pressure. Before then, a female cabinet member was charged with blasphemy for criticizing Islamic law, but was also spared after international protest erupted. Other journalists were imprisoned for blasphemy after debating the compatibility of sharia law with democracy, but then quietly allowed to leave the country. It is even reported that other Christian converts are in prison there but not much is known about them.

...this is about more than Mr. Rahman. This will be a persistent, recurring problem under Afghanistan’s sharia apostasy and blasphemy laws. The administration also needs to do more to ensure the reform Afghanistan’s judiciary. President Karzai must be encouraged to wrest it from the control of Islamists like Supreme Court Chief Justice Fazl Hadi Shinwari, who once told our National Public Radio that it is his duty as a judge to “behead” those who do not conform to Islamic law...

The whole of the civilized world needs to stop supporting State Islam and Sharia law. You can read the whole article HERE.
Posted by Chas at 8:12 AM

It seems to me when you have such a radical relegion that cannot even agree within itself on any issue that the whole world has a problem. Right here in the Bible belt we have lots of muslims some are very American-ized others are the veil wearing head down three ft behind the old man. They all are working to recuit our children though our public schools. Thats the part that bugs me. Ca. and many other states are adopting Islam as history in order to teach it. There has been an on going fight in Tulsa Ok between the school dists. and the double standards of seperation of church and state.
This is already our problem. CAIR IS NOT HERE TO PROMOTE THEIR RELIGION THEY ARE HERE TO MAKE THEIRS THE DOMINATE RELIGION.
This strikes fear in my hear for my grandchildren.

take care and thank you again