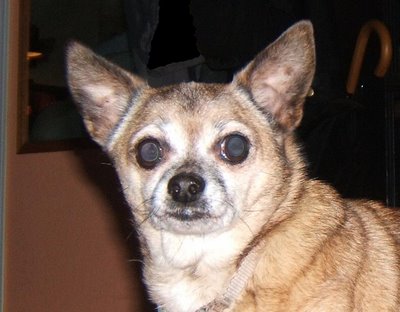 Our Chihuahua, Coriander, was over 12 years old, and seemed to be troubled by cancerous growths. At least, we think it was cancer. We never took her in for tests or anything, but from the information I could find on the internet, it seemed likely it was some kind of cancer.

Many years ago, we had put all our dogs on a raw meat diet, and they responded well to it. But for the last couple of years, Coriander seemed to stop thriving. For some time she had not been well, and slowly continued to deteriorate. Her breath smelled bad, and she was often bloated. She would often be constipated. Her appetite lessened, until she would hardly eat at all, and when she would eat, she would often vomit it up. Little tumors appeared around her lips. Growths started to appear on the skin of her belly, and in her ears. She began to itch and bite herself, and began losing hair in "hot spots", and had trouble sleeping at night. We tried numerous remedies; some seemed to help the syptoms a little, but she just continued to get worse.

The treatments for cancer for dogs are as nasty as the ones for humans, and just about as expensive. At least a human has some idea of what is happening in a situation like that, but to an animal, it's confusing. Cancer treatments for dogs often don't extend the life of the animal by very much, and the treatments can cause them much distress. We were thinking we would have to have her "put down".

That is never an easy thing to do with a dog. But chihauhau's can be very aware, in some ways more than other dogs. For instance, Coriander knows not just her name, but our names and the names of the other dogs as well. We often joked that she is almost human. Her body was failing her, but her mind was still very much intact, so we dreaded the day that seemed to be fast approaching.

Several people I know were dealing with cancer issues, and I had been reading a book called "How to Fight Cancer & Win" by William L. Fischer. In the book were some natural remedies that were discussed. One of the most popular was a flaxseed oil diet, by a German doctor, Johanna Budwig. I thought we had nothing to loose by trying it on the dog, so I began mixing it in with her food, and feeding her in smaller amounts so she could keep it down.

At about this time an old friend came back into our lives, who we had not seen in a long while. In fact, the last time we saw him, he was suffering from stage III liver failure, and was waiting for a liver transplant.

Now he was a picture of health. He did NOT have the transplant. He claimed his recovery was due to Tahitian Noni Juice. He was also a distributor for Tahitian Noni, and left us with some bottles of the juice.

We really weren't sure what to think of Noni Juice, but we decided to start giving it to the dog, as it couldn't hurt, and might help. Before her meals, I would squirt five shots of Noni in an eydropper down her throat, then mix some in with her food.

After a few weeks, she started to sleep better, and the tumors around her lips went away. She started to keep her food down, and her appetite improved. The growths on her belly began to shrink and dry up. We started using a Noni oil spray on her skin, which seemed to help.

We witnessed a steady improvment. The bad breath, bloating and constipation went away. The hot spots on her skin went away, her coat improved. The growths on her belly had turned into discolored scabs. We ran out of the Noni oil, and started to use tea tree oil instead. Her skin responded well to this, and healed up completely.

It's now four months later. Not only is Coriander physically well, but mentally, she is also greatly improved! She is playful and perkey and raring to go, we haven't seen her act like this in years. The transformation has been amazing.

I don't know if it was the flaxseed oil or the Noni Juice or both, but I know that neither hurt and both may have helped. I give the dogs a bit of both in their food now. We may start adding them to supplement our diet too. 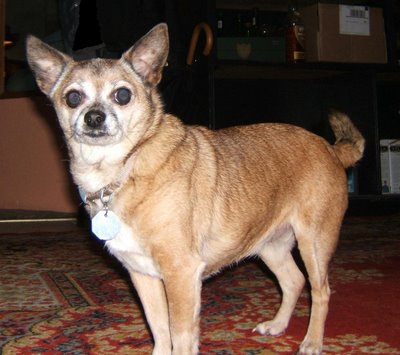 You can really see her cataracts which I noticed the other day for the first time.

No! I used Photo Express to remove the red-eye of the flash. I didn't get the color quite right. I'd fix it, but blogger has been real difficult to access lately, so it's not easy to make changes.

Fascinating. I often wonder what really works and what is just life. It is great that she's feeling so much better.

I know the pictures might not look too dramatic, but compared to the way she was, they are. Her ears are up. Her tail is up (and often waging).

When I'm preparing her food, she jumps around with excitement and anticipation. She plays with the other chihuahua instead of snapping at him. She hasn't behaved like this in YEARS.

With humans, and the treatments they use to get well, you can wonder how much of their results was a placebo effect. But dogs have no expectations, so placebo effect doesn't apply to them. We tried a lot of things that didn't work. This time something did.

Bodies are miraculous; they try to stay healthy wether you help them or not. Maintaining or improving health is sometimes just giving the body what it needs at the right time, to help it function naturally. Sometimes what the it needs is just the right foods to help it do it's job.

I've been wanting to post about this for a while. When you find something that works, you want to share it.

Noni juice and tea tree oil! Thanks a lot. I will store this info away incase it's ever needed.

My dog looks just like yours, she also has the same cancer tumor, we had it checked this week and it came Chiquita is now almost 15 yrs old, and is too old for the surgery. how old was your dog? And how long did she live after your treatment? I am going to the health food store tomorrow. thanks for the info :) Lisa

She is still alive! And well!

She's about 14 years old now. Her vision and hearing aren't as good as they were, and she has slowed down, but she still enjoys life. Sometimes she jumps around with excitement, other days she is more subdued.

I give her a small amount of noni and flaxseed oil each day before her meal in the evening. Once a week (more often if she needs it) I give her a glucosamine liquid for dogs that I got at our local health food store. The brand is called "Happy Hips". It gives relief for her arthritis.

Best Wishes for your Chiquita.