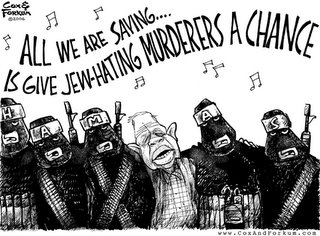 That "Jimmah" Carter is a funny old fool, isn't he?

Three sons left home, went out on their own and prospered. Getting back together, they discussed the gifts they were able to give their elderly mother.

The first said, "I built a big house for our mother."

The second said, "I sent her a Mercedes with a driver."

The third smiled and said, "I've got you, both beat. You know how Mom enjoys the Bible, and you know she can't see very well. I sent her a brown parrot that can recite the entire Bible. It took 20 monks in a monastery 12 years to teach him. I had to pledge to contribute $100,000.00 a year for 10 years, but it was worth it. Mom just has to name the chapter and verse, and the parrot will recite it."

Soon thereafter, Mom sent out her letters of thanks:

"Milton," she wrote the first son, "The house you built is so huge. I live in only one room, but I have to clean the whole house."

"Marvin," she wrote to another, "I am too old to travel. I stay home all the time, so I never use the Mercedes. And the driver is so rude!"

"Dearest Melvin," she wrote to her third son, "You were the only son to have the good sense to know what your mother likes. That chicken was delicious!!!"

According to a news report, a certain private school recently was faced with a unique problem.

A number of year 12 girls were beginning to use lipstick and would put it on in the bathroom. That was fine, but after they put on their lipstick they would press their lips to the mirror leaving dozens of little lip prints.

Every night, the maintenance man would remove them and the next day, the girls would put them back.

Finally the principal decided that something had to be done. She called all the girls to the bathroom and met them there with the maintenance man. She explained that all these lip prints were causing a major problem for the custodian who had to clean the mirrors every night.

To demonstrate how difficult it had been to clean the mirrors, she asked the maintenance man to show the girls how much effort was required. He took out a long-handled squeegee, dipped it in the toilet, and cleaned the mirror with it.

Since then, there have been no lip prints on the mirror.

There are teachers, and then there are educators... 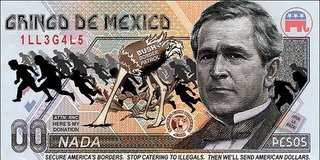 (H.T. to Texas Fred at And THAT is MY Opinion)


The first day of school for the 4th grade class brought a new student,Suzuki, the son of a Japanese businessman.

The teacher said, "Let's begin by reviewing some American history. Who said "Give me Liberty, or give me death?"

She saw a sea of blank faces, except for that of Suzuki, who had his hand up. "Patrick Henry, 1775", Suzuki said.

Again, no response, except from Suzuki. "Abraham Lincoln, 1863."

"Very good!" The teacher snapped at the class, "Class, you should be ashamed. Suzuki, who is new to our country, knows more about our history than you do."

At that point, a student in the back sighed, "I'm gonna puke!"

The teacher glares and asks "All right! Now who said that?"

Suzuki jumps out of his chair waving his hand and shouts to the teacher, 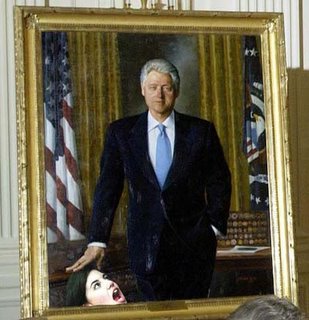 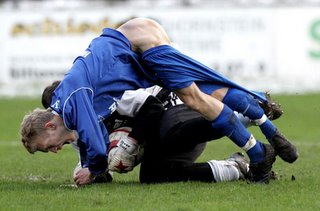 I was driving with my three young children one warm summer evening when a woman in the convertible ahead of us stood up and waved. She was stark naked! As I was reeling from the shock, I heard my 5-year-old shout from the back seat, "Mom! That lady isn't wearing a seat belt!

My son Zachary, 4, came screaming out of the bathroom to tell me he'd dropped his toothbrush in the toilet. So I fished it out and threw it in the garbage. Zachary stood there thinking for a moment, then ran to my bathroom and came out with my toothbrush. He held it up and said with a charming little smile, "We better throw this one out too then, 'cause it fell in the toilet a few days ago.

On the first day of school, a first-grader handed his teacher a Note from his mother. The note read, "The opinions expressed by this child are not necessarily those of his parents."

A woman was trying hard to get the ketchup to come out of the jar. During her struggle the phone rang so she asked her 4-year-old daughter to answer the phone. "It's the minister, Mommy," the child said to her mother. Then she added, "Mommy can't come to the phone to talk to you right now She's hitting the bottle."

A little boy got lost at the YMCA and found himself in the women's locker room. When he was spotted, the room burst into shrieks, with ladies grabbing towels and running for cover. The little boy watched in amazement and then asked, "What's the matter haven't you ever seen a little boy before?"

While working for an organization that delivers lunches to elderly shut-ins, I used to take my 4-year-old daughter on my afternoon rounds. The various appliances of old age, particularly the canes, walkers and wheelchairs, unfailingly intrigued her. One day I found her staring at a pair of false teeth soaking in a glass. As I braced myself for the inevitable barrage of questions, she merely turned and whispered, "The tooth fairy will never believe this!"

A little girl was watching her parents dress for a party. When she saw her dad donning his tuxedo, she warned, "Daddy, you shouldn't wear that suit."

"You know that it always gives you a headache the next morning."

A little girl had just finished her first week of school. "I'm just wasting my time," she said to her mother. "I can't read, I can't write and they won't let me talk!"

A little boy opened the big family bible. He was fascinated as he fingered through the old pages. Suddenly, something fell out of the Bible. He picked up the object and looked at it. What he saw was an old leaf that had been pressed in between the pages. "Mama, look what I found", the boy called out" What have you got there, dear?" With astonishment in the young boy's voice, he answered, "I think it's Adam's underwear.


Ted Kennedy Children's book cover of the the week: 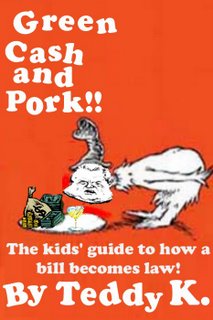 And how about a Ted Movie: 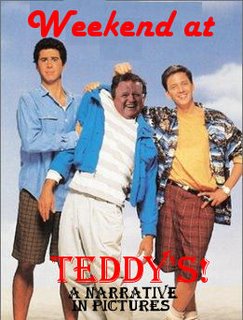 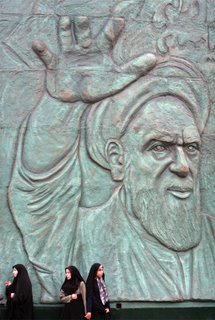 I don't know if this is more funny-humorous or funny-strange. Isn't the Ayatola giving the hand sign that Mr. Spock does in Star Trek? No wait, it's the wrong fingers for that. Maybe it's just funny-creepy, in a larger-than-life, personality cult, overdone fascist art kind of way.


Better Far to Risk a Fall

You can’t fell trees without some chips.
You can’t achieve without some slips.
Unless you try, you’ll wonder why
Good fortune seems to pass you by.
Success is not for those who quail
She gives her best to those who fail,
And then with courage twice as great
Take issue once again with fate.
‘Tis better far to risk a fall,
Than not to make attempt at all.

When my grandmother was raising me in Stamps, Arkansas, she had a particular routine when people who were known to be whiners entered her store. My grandmother would ask the customer, "How are you doing today, Brother Thomas?"

And the person would reply, "Not so good today, Sister Henderson. You see, it's this summer heat. I just hate it. It just frazzles me up and frazzles me down. It's almost killing me." Then my grandmother would stand stoically, her arms folded, and mumble, "Uh-huh, uh-huh." And she would cut her eyes at me to make certain that I had heard the lamentation.

As soon as the complainer was out of the store, my grandmother would call me to stand in front of her. And then she would say the same thing she had said at least a thousand times, it seemed to me. "Sister, did you hear what Brother So-and-So or Sister Much-to-Do complained about?" And I would nod. Mamma would continue, "Sister, there are people who went to sleep all over the world last night, poor and rich and white and black, but they will never wake again. And those dead folks would give anything, anything at all for just five minutes of this weather that person was grumbling about. So you watch yourself about complaining, Sister. What you're supposed to do when you don't like a thing is change it. If you can't change it, change the way you think about it. Don't complain."

It is said that persons have few teachable moments in their lives. Mamma seemed to have caught me at each one I had. Whining is not only graceless, but can be dangerous. It can alert a brute that a victim is in the neighborhood.