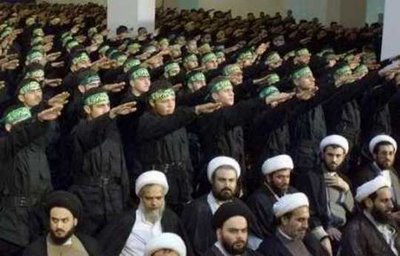 This is a photo of a Hizbollah "Swearing in ceremony" in Iran.
Date: December 2003

It's no accident that Islamic armies and militias identify with symbols and imagery of Nazi propaganda. There is a rich history of interaction going back to Hitler's time.

I've recently found an Australian site that posts details of this history, with photographs. I've read some of the history before, but have never seen the photographs. Here are a few of them: 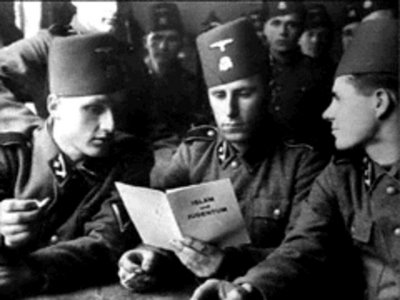 Here is a photo of Bosnian Muslims wearing fezzes with Nazi insignia. Bosnian Moslems volunteered to serve in the German Waffen-SS.
Photo: 1943. 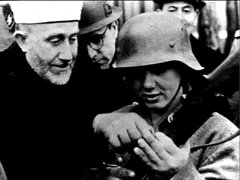 Here is a photo of Hajj Amin al Husseini, the Grand Mufti of Jerusalem, with Bosnian Moslem fighters. Hussenini collaborated with Nazi Germany even before the war. He fully supported the Final Solution for the Jews, and wanted it extended to Palestine and North Africa as well. He also wanted the Luftwaffe to bomb Tel Aviv. 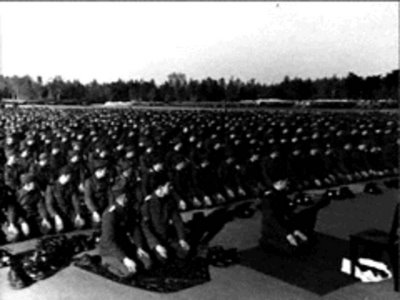 Here we see Bosnian Moslem soldiers in the German army, at prayer. Date: 1943

There are more pictures, and a great historical synopsis. I was going to try to print excerpts from it here, but I think it would be better to just go to the site and see and read it for yourself. The history is not very long, but it's very informative, and the photos are facinating. The site to visit is here:

You may have to scroll down a bit from the top of the page, before the History and photos begin. They are excerpted from the book "Encyclopedia of the Holocaust".

If you think Yasser Arafat and Saddam Husein had no Nazi ties, think again. When you understand the historical and family ties, modern events and recent history makes much more sense. It all fits together.

Islams finest on the march...
WARNING: Near the bottom of the page this links to, is a picture I could not bring myself to post here. It is a photo of a box on the ground, with the severed heads of three men in it. The label for the picture implies it is from Iran. There is I think arabic writting on it, but I don't know what it says. Can anyone translate?

I once saw a documentary film called "Night in Fog". It was a French documentary about the German concentration camps, and it included extensive footage that the Germans themselves had taken, of what they did there.

There was one scene, a shot of a Guillotine, and next to it, a basket filled with the severed heads of Jews. This photo reminds me of that. The Nazis have been estimated to have guillotined some 40,000 people in Germany and Austria; possibly more than were beheaded during the French Revolution. It's one of many things Islamism and Nazism have in common.

The Nazi roots of the Muslim Brotherhood

Hezbollah: Definition and much more from Answers.com

Chas, I knew about the connection, but not the total depth of it. I don't think I can handle the pictures, especially of severed heads. I've read many books about the holocaust and they disturb me greatly. Man's inhumanity to man is sometimes more than my heart can bear.

But thank you for posting this. It is definitely something people need to realize. I commend you for going to all the trouble to put this together. I'm certain it entailed a lot of tiresome research.

I feel like the kid in that movie that says "I see dead people".

For the past two weeks, I've been reading about Muslim and Nazi killings. Many sad stories. Many pictures that are so horrible I can't post them.

The post about the hangings in Iran was really difficult, because some of the people who were hanged were horrible criminals; no sympathy from me there. Yet many others were not, yet they were treated just the same, sometimes even worse. To kill people for their religous beliefs is just barbaric and sick.

Nazism and Sharia law are two pathologies that must be stopped; there are no excuses good enough to justify either one. And with weapons of mass destruction becomming increasingly available, we can no longer afford to look the other way while these murderous pathologies continue to expand and extend themselves unabated.

While it isn't really pleasurable posting about this stuff, I feel it is necessary. I'm tired of liberals telling me that there is no Nazi connections with Islam, and that I am just being judgemental and racist. As a wise man once said, "Those who don't know history are doomed to repeat it."

Did you catch the History Channel program last night on the connection between Saddam and Hitler?

No, we missed it, though I'm glad to hear that the History Channel is showing something like that. We will have to watch and see if they run a repeat, it would no doubt be interesting. Thanks for mentioning it.