The lesser of two evils 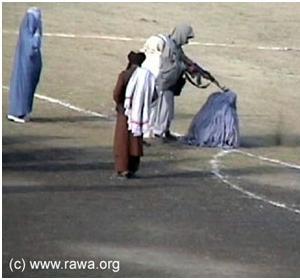 We are living in a world that is becoming increasingly smaller. We used to believe that terrorism existed only in far away places; that we could (and were told by the multiculturalists, we "should") allow other countries to do as they wish, no matter how cruel or unjust, and not be affected by it directly, while we got on with our own lives. But this has painfully been demonstrated as not true. Ignoring what goes on in Sharia based societies has brought us where we are today.

Every time someone is tortured or executed under Sharia law, without legal represention or a fair trial, a monster grows bigger; a facist movement grows stronger. The more we ignor it, the stronger it gets. And thanks to technology, if you live far away from terrorism, the terrorists can bring it to your neighborhood. 9-ll was a low tech-attack. Do we need something more high-tech and brutal to wake us up? By then, it could be too late.

I am registered to vote as an Independant. I was a Democrat for many years, but have become too disgusted with them to want any further affiliation with them. I don't waste my votes on 3rd party vote spoilers, which allow the worst people to get in. I look at the Republicans and Democrats, and I choose the lesser of two evils. Neither party is perfect, and in the real world we must work with what we have, or we just end up whinning on the sidelines, inaffective and powerless.

I voted for Bush in 2004, and I stand by that. The Democrats haven't a clue how to deal with the dangers we are facing - they clearly don't see it. I can disagree with Bush about many things, but compared to the Democrats, he is the best we've got. We are in a war wether we want to be or not, and there is no turning back. If weapons of mass destruction become available to facist Islamist suicide/murders, the world as we know it will not survive; we will be facing a new dark age like the world has never seen... if we even survive.

We don't have unlimited chances to get this right. We have a window of oportunity to act, and if we fail... we can't afford to. Bush knows this, and that is why I support him. He doesn't have to be right about everything. He just has to be better than all the alternatives. I hear a lot of complaining, but I don't see any better alternatives.

Today Debra Saunders has written a good piece, called "Give the President Some Credit".

Miss Chatterbox has written a great post called "In Defense of the War and George W. Bush--Part 1".

Tammy Bruce has a very relevant post about military deaths: "What the Numbers Tell Us".
Posted by Chas at 12:23 PM

Good reasoning and thanks for the links. Checking them out now.