The United States of Islam 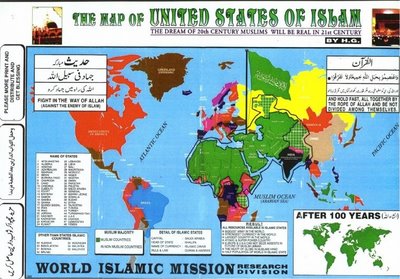 Looks like someone's got some big plans. Note the map in the lower right corner that says "After 100 Years". You can find out more about the map and the people behind it at Little Green Footballs.

Oh, and how about this:

Filled With Rage Against Islam

Seems like the last week or so has witnessed a new willingness, in parts of the mainstream media, to speak of a problem with Islam itself, not just with "extremists." Especially in the conservative media, but not only them. The crushing of Western free press by cartoon rage seems to have been an important turning point.

It Followed so quickly on the intifada in France a few months ago. Then there was the recent gruesome 3-week torture by Muslims of a French Jew, who finally died. And the increasing awareness that Europe is rapidly turning Muslim by immigration and reproduction. There is also the wave of rapes by Muslims in Europe, who say they deem unveiled European women to be asking for it. And of course a while back there was the murder, on behalf of Muslims, of the gay Dutch politician Pim Fortuyn when he proposed shutting down further immigration to Holland, because he didn't appreciate Muslim attitudes toward gays ("gays should be killed") and he objected to Muslim supremacist goals in general. The tolerant Dutch hadn't seen a political assassination for centuries. Then there was...

There is quite a bit MORE. And by more I don't just mean the list of atrocities, but some real contemplation, about what we are facing and who we are. You can read the whole thing at The Freedom Fighter's Journal.
Posted by Chas at 9:54 PM