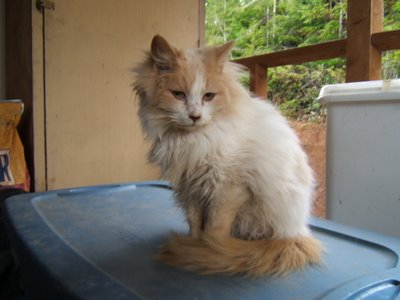 It's a boy... a "fixed" one. At least that is what Andy says, after brushing the beast and checking it's "vents". So I think we will call the abandoned Persian Pussy "Mohammed", or "Momo" for short. Hopefully that won't cause any riots or killings anywhere. 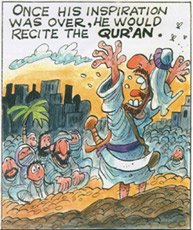 I came across an interesting publication on the Zombietime website. It's a comic book satirizing Mohammed, in a humorous cartoon biography called Mohammed's Believe It or Else! by pseudonymous artist "Abdullah Aziz." It demonstrates many of the bizarre beliefs of Islam, often providing their scriptural references or other sources. In one part there is a prohibition against cats and dogs as pets, although the references seem to refer more to dogs specifically.

The comic book is a downloadable PDF file. You may want to have a look:

Mohammed's Believe It or Else!
Posted by Chas at 1:07 AM

Much better name than Fluffy! I downloaded the book so I'll be looking at it later.

"Fluffy" was a boring name, but also "gender neutral" til we figured out what "it" was.

We could have called him "Stinky", I suppose. It would have been gender-neutral AND descriptive, unfortunately.

The beast really needs a bath, but cats and water are two things that are really difficut together, and I'm not willing to risk getting scratches and cat bites.

If only we could get him dry-cleaned or Fabreezed... (and maybe Scotch-Guarded, too) ;-)