State Islam and a modern society are incompatible 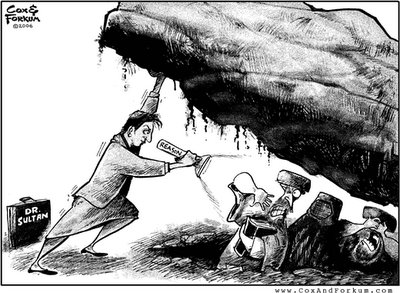 Hat Tip to Cox and Forkum. You can read the related text here:
Sultan of Enlightenment

I've been reading a lot about Sharia law and the treatment of women in Iran. I saw a photo of one woman, severely bruised after a beating. Many women like her had supported the Ayatola in Iran against the Shah, because the Ayatola promised that a new SECULAR government would continue to run the country, once the Shah was overthrown. But the Ayatola lied; they were all betrayed, and had a theocracy forced on them instead.

It's clear that Sharia law is entirely incompatible with democracy. I agree entirely with Tammy Bruce. In her recent post, "Afghan Christian Convert to be Freed" she puts it succinctly:

The Afghan Shari'a court decared Abdul Rahman a "sick person" and declared him unfit to stand trial. While this is excellent news for Mr. Rahman the primary problem still exists: a nation that owes it freedom to the civilized world has been allowed to operate as barbarians. For every Muslim who declares that Islam recognizes other religions and Christians and Jews as "people of the book," the sham of that is revealed.

The absurdity of this, of course, is how Muslims have rampaged around the world causing death and destruction because of the cartoon "insult," and now they declare someone who becomes a Christian "insane."

Perhaps we're seeing a little projection here. Bottom line: we should have treated the conquered Afghans and Iraqis as we did the Japanese: we should have written their constitutions for them and outlawed theocratic rule. For the Japanese it was an end to state Shinto. And if the world is to get past the barbaric insanity of mullahs and imams, we are also going to eventually have to outlaw state Islam...

(bold emphasis mine) Tammy doesn't mince words. Why can't western "liberals" understand this? The Iranian liberals who supported the Ayatola against the Shaw have certainly come to understand the reality of a Sharia based government... at least, those who are still alive do.

Tammy also believes we are pandering too much to Muslim Theocracy:

...Wait, what "difficult debate?" This is 2006, not 700. The entire civilized world understands that you don't kill people becuse of their religion, and that theocracies (whether it be Japanese Shinto or Germanic Hitler-worship) cause death and destruction and ruin people's lives. There is no worldwide debate. What Islamic theocracies deliver to their people and the world is rank barbarism...

"This is an evolutionary process," Rice said on Fox News. "It's a young democracy."

My goodness, such pandering. To dismiss this obscenity as something that happens in a "young democracy" is disgusting. This has nothing to do with democracy, and everything to do with islamic theocracy. I lose more and more hope when the person I admire the most ends up sounding like Jimmy Carter...

This article by Cinnamon Stillwell looks past the tired old hippy socialist stereotype "feminists" still being promoted by the left, and instead looks at the intelligence and bravery of genuine feminists like Dr. Wafa Sultan, and Italian author Oriana Fallaci and other notable women, who are willing to tackle the very real problems and suffering of women under Sharia law. Just a brief excerpt:

...Born in Syria to a middle-class family and raised a Muslim, Wafa Sultan began to reexamine her religious beliefs after a traumatic incident. A respected medical school professor was murdered before her eyes by two Muslim Brotherhood members shouting "Allahu akbar!" (God is great!). Eventually, she became a secularist and started writing for the Arab American Web site Anneqed.com. She became a strong critic of the intolerance and violence increasingly associated with the Muslim world. She also tackled the taboo subject of Muslim anti-Semitism, rejecting the hatred with which she had been indoctrinated as a child.

Sultan is now working on a book that she says "is going to turn the Islamic world upside down." Indeed, such upheaval is needed now more than ever. If one woman can have such a great impact, think what hundreds, thousands or even millions could do...

There is much more, also about other women as well and their struggles with Islamism. They put the leftist "feminists" to shame. The article has many embedded links, making it a great reference resource. You can read the whole thing HERE.
Posted by Chas at 11:34 AM

Wafa is very right in her assesment of islam. If she can convince the idiots in that part of the world to change, more power to her but I feel all hope is lost in that culture and it needs to be wiped off the face of the earth.

Islam has been rigidly imposed on people for centuries; they have had no choice. Democracy is a complete threat to that. If choice is allowed, if people are allowed to question, the whole thing falls apart. At the very least, Islam would be forced to evolve.

I think that the best way to wipe the intolerant culture of Islam off the face of the earth is democracy. Even if it has to be imposed at first.

That's not to say it would be quick or easy. But the place to start would be to support truely moderate Muslims, and educated secular Arabs like Wafa Sultan. And to stop putting up with the Politically Correct crap about respecting Sharia law. This stuff continues unabated because we (the west) have tolerated it for so long. By tolerating it we enable it. That way has lead to where we are now. I say enough.

Wafa and Fallaci are the brave ones, but let's be honest: the whole of Islam needs to be reformed. They need an Iqbal al-Luther to rise from the ranks, and I'd nominate this guy to possibly affect a change.