Did the Cartoon Riots Kill the Ports Deal?

This is an idea I expressed earlier, and I'm starting to see articles that express this same thought. Below are some excerpts from an article on Dinocrat.com that makes a strong case for this idea: 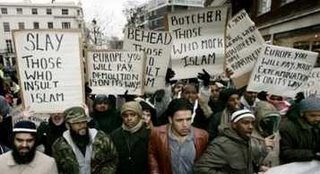 The Cartoon Riots changed the American people’s understanding of the war; the ports deal is the proof

We have said that the Cartoon Riots were as important in their way as 9-11 and that they were responsible for killing the ports deal. The overwhelming unpopularity of the ports deal — 70% of all Americans — was likely not, however, an emotional spasm by the American people, but a turning point. The fundamental nature of the war has changed in the minds of many Americans. This is no longer is Global War on Terror, but World War IV: the War against Radical Islam. The political class would do well to figure this out.

If the ports deal had come up six months ago, it probably would have gone through. There was no opposition to the deal for the first two months after its annoucement in November 2005. If the Cartoon Riots had not occured during the approval process, the deal likely could have concluded quietly...

I think Dinocrat has a good understanding of what the "turning point" for the American people was:

...“the Islamists have contrived to make themselves and their religion look repugnant…mobs with primitive bloodlust killing people over drawings, like something out of anthropology class. These riots, making Islamist rioters look like savages, and making the mute among their co-religionists look even worse in their silence, have also brought renewed focus to the atavistic and revolting beliefs of the Islamists about art, the status of women, and their real plans for the Infidels. Many Americans have begun to ask: who would want to have anything whatsoever to do with Islam after watching such violent, threatening, irreligious behavior?” People who riot over drawings are either evil, primitive or mentally unstable; people who riot over drawings for “religious reasons” are all that and deadly dangerous too.

(Meanwhile, the MSM took one look at the violent Brownshirts of our time and their neo Nazi book burnings, and couldn’t begin to bow and scrape fast enough before them, making every kind of excuse for the mobs and their violence and threats; but the people are not as craven or obtuse as the elites.) ...

There's lots more, with links too, you can read the rest HERE.

The Mulsims who deliberately stage and organize protests and and incite riots want to provoke a reaction of revulsion by westerners, to divide the west from their Muslim allys, and weaken or drown out any truely moderate Muslim voices. This is why I'm not ready to give up on the idea of cultivating and promoting moderate Muslims; to give up on moderates is to declare war on Islam, which is what the Jihadists want. I think we are at war with a dangerous mental pathology IN the Islamic world, rather than the whole of Islam itself. It's only to the benefit of the Jihadists if we fail to make that distinction.

No More Excuses for Muslim Violence
Here is another excellent article by Jack Kelly. An excerpt:

...The ludicrous lengths to which many in the Establishment go to avoid drawing any connection between Islamic terror and Islam itself is causing a backlash among Americans, one which is causing otherwise sensible people to overlook critically important distinctions.

The backlash was evident in the debate over the attempted acquisition by Dubai Ports World of the British firm which operates commercial terminals in some U.S. ports -- if Democratic demagoguery and Republican cowardice in the face of xenophobia can be characterized as "debate."

The rejection of the ports deal is a self-inflicted wound, one based on the assumption that all Muslims are untrustworthy.

I said in my column March 5 there are genuinely moderate Muslims who support liberty and democracy. I received a distressing number of erudite emails -- many quoting from the Koran -- from people who said no, the problem is Islam itself.

People like Mr. Taheri-azar fuel this assumption. He was, according to classmates, a friendly guy who drank and smoked pot. His murderous radicalism seemed to appear out of the blue.

"This is what I have dubbed the 'Sudden Jihad Syndrome,'" wrote Daniel Pipes. "It has the awful but legitimate consequence of casting suspicion on all Muslims. Denouncing these views as 'Islamophobia' is as baseless as accusing anti-Nazis of 'Germanophobia.'

"Instead of presenting themselves as victims, Muslims should address this fear by developing a moderate, modern and good neighborly version of Islam that rejects radical Islam, jihad, and the subordination of 'infidels,'" he said...

(bold emphasis mine) I think truely moderate PEOPLE the world over are really getting fed up. Barbarians seem to understand nothing but brute force, which is why they are so quick to use it themselves, even over silly things like innocuous Danish cartoons. The prospect of such savages being allowed to possess nuclear weapons is unacceptable.

We can argue forever about wether Islam is reformable or not. But we must also deal with the facts. If a RELIGION is being used to cultivate terrorism, why should we tolerate it, anymore than we would tolerate a country that harbors terrorists?

If Islam can reform and join the civilized world, so be it. If it can't reform, then it doesn't deserve to survive. Let it's adherents choose, and take the consequences.

You can read the whole of Jack Kelly's article HERE.
Posted by Chas at 9:21 AM

"but the people are not as craven or obtuse as the elites.) ..."

That is exactly right! I sure wouldn't want to stand back-to-back with any of the elites if I were threatened by anyone or anything. They are cowards and mistakenly believe themselves to be superior to the rest of humanity.

The cartoon riots didn't even wake them up, except where the port deal is concerned. Nothing will... they are so steeped in denial they might as well be in a coma.

The irony is, the left accuses conservatives of being Nazis, yet it's only real, actual totalitarian facists that they have any respect for.

Great post Chas.. The cartoon thing made a lot of people see the rags for what they REALLY are, a bunch of GODLESS heathens... And I think it influenced the Ports deal... I hope it did...

That makes a lot of sense.

Wouldn't it be great if there was just a decision making time where all muslims would just seperate into two groups. one that wants to worship in peace and the other Targets.